At the group stage of the World Cup, several epic confrontations await us.

The draw for the World Cup, which will take place in November-December this year, took place on April 1 in Qatar. Our team did not get to the tournament and did not even have a chance to do so, because FIFA eliminated Russia due to pressure from our rivals in head-to-head matches.

Poland was the most opposed to us, and in the end benefited – went to the World Cup for free, playing only one match instead of two. Lewandowski and company are in a group with Argentina led by Messi, it will be a battle of two bright goal scorers.

But instead of Poland, there could be Russia. Oh, we will not see Igor Diveev chasing Lionel.

To begin with, a little help. The World Cup will have 32 teams, eight groups of four teams. In the playoffs, the group leaves the two best teams (no better third places, as in the last Euro 2020). There can be no more than two European teams and no more than one of the other confederations in one group.

Three participants of the World Cup are still unknown. The match Ukraine – Scotland has been postponed, the winner of this pair will play for a ticket to Wales. Also yet to be identified are the best in the UAE pair – Australia (the winner will fight Peru) and Costa Rica – New Zealand.

The debutant at this World Cup is only one – the national team of Qatar. The team never made it to the finals of the World Cup and immediately got into the first basket as the hostess. It was the same with Russia in 2018. However, Qatar, despite its poor history, is not the worst ranked team – even lower than Ghana. The composition of the baskets, by the way, was formed according to the FIFA rating (finally it came in handy somewhere).

Battle of the scorers – Lewandowski against Messi

The Netherlands, in my opinion, fell into the so-called “group of life”. They will play against Qatar, Senegal and Ecuador. In Group B fun – the United States will play against Iran (a powerful history of relations), as well as against England. They will be accompanied by someone from the Ukraine-Scotland-Wales troika. Principal confrontations – at least spare.

Our “favorite” Poland will play against Argentina in Group C. This rivalry is seen as a battle of the world’s best strikers Robert Lewandowski and Lionel Messi. Also with them are Mexico and Saudi Arabia. But instead of Poles, Russia could be! Just imagine, Diveev is trying to stop Messi… Now the sympathies of most Russians will be on the side of Argentina, because the Poles can not drive endlessly. 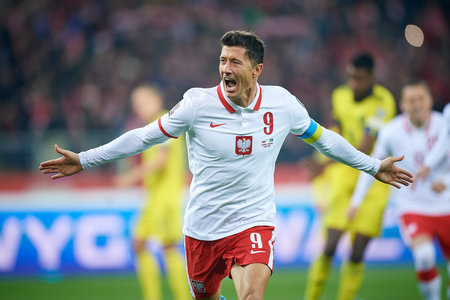 In Group D, the current title holder France will fight Denmark, Tunisia and one of the Peru-Australia-UAE troika. In Group E there is a fundamental confrontation between Spain and Germany (repeat of the Euro 2008 final and the 2010 World Cup semifinals), as well as Japan and the winner of the pair Costa Rica-New Zealand.

The Croats, who deprived us of a direct ticket to the World Cup, came to Belgium, Canada and Morocco. How would Russia play here? A very difficult draw. Interesting similarities were formed in Group G – there are three teams that played each other at the 2018 World Cup: Brazil, Serbia and Switzerland. Only now with them is not Costa Rica, but Cameroon. In the last group H the composition is as follows: Portugal, Uruguay, Korea and Ghana. At first glance, everything is obvious, but Son Hyun Min and his team, which beat Germany in Russia, will definitely fight for the playoffs.

The groups turned out to be a sight to behold. It remains to wait for the last three participants, and the picture will be most complete. Qatar will play Ecuador in the opening match. We look forward to the World Cup! The only thing is that it is a pity that now is a holiday without us.