Foreigners are pretending that the medals of this tournament mean something.

But the harsh and objective reality is relentless. No matter how many different American journalists try to assure us that “there are no problems” – without Russia, a female figure is worth almost nothing.

No matter how cute Sakamoto’s sincere laughter is at the top of the podium, everyone understands that her victory is artificial.

Abroad, and especially overseas, almost the main advantage of the competition was called the presence of real intrigue in the fight for awards. Without the Russians, this intrigue really was. But you can do it in almost any form – cut the top three (or as in pairs in the top 5) – you are guaranteed to get intrigue, as the second echelon is always more competitive and numerous.

Which does not negate the fact that only one girl showed a level, at least somehow related to the fight for World Cup medals. Kaori Sakamoto looked like an absolute favorite and confirmed her status, although she did not break Alina Zagitova’s record for the amount from Saitama-2019. Yes, the Japanese already has a bronze medal at the Olympics, so it cannot be said that she does not know how to fight Russian girls, but objectively without doping and unprecedented pressure on Kamil Valiyev, Kaori had no chance to get into the top three. 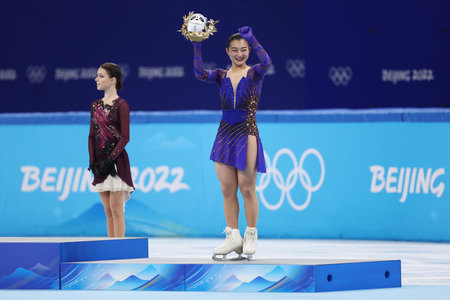 With the other medalists it is even sadder.

With Hendrix and Lew’s points, it’s hard to get into the top 2 even at the Grand Prix stage, not that at the World Healthy Man Championship. Mariah Bell, a beautiful and radiant girl, almost climbed the podium, but all her stunts were 3 + 2. She is fourth with only three points behind the top three.

This is an indicator of the strength of this tournament. Solid fake. In everything. And as programs and hires of pseudo-leaders. And in the public reaction to the alleged championship performances.

Figure skating in women’s singles has rolled back, maybe not for 20 years, as Tatiana Tarasova noted, but certainly in some Dophenchan era. Only three girls climbed the triple axel (Liu and Yu Yong – both undercut, Higuti fell), there were no quadruple attempts at all. Moreover, none of the girls cascaded with a triple rittberger.

That is, even the level of Medvedev and Zagitova seems unattainable here.

Russian girls can be accused of imperfect ultra-si technique, short career and uniformity of images. But to consider Montpellier 2022 as something other than total degradation is not possible at all. Of course, the details will be forgotten, and the result will remain. However, the charming, positive and good figure skater Sakamoto will forever go down in history as an artificial champion.