TARS, March 30. German astronomers have discovered a giant ring of young stars in the central regions of the Milky Way that surrounds the center of the Galaxy and formed about 7 billion years ago. This was reported by the press service of the Max Planck Institute for Extraterrestrial Physics (MPE).

“We combined the results of our own observations with APOGEE survey data and measurements from the GAIA probe to determine the exact orbits of more than 30,000 stars in the center of the Milky Way. This allowed us to open a giant ring of relatively young stars surrounding the central bridge of the Galaxy, “said MPE researcher Shola Wiley, who was quoted as saying by the institute’s press service.

Today, astronomers have no doubt that the Milky Way belongs to the great spiral galaxies, but scientists can not say exactly what size it is, how its arms are arranged and how the stars are distributed inside it. This is due to the fact that humanity is not able to leave the borders of the Milky Way and look at it from the side, like other neighboring spiral galaxies.

This forces scientists, according to Wiley, to study the structure of the Galaxy in indirect ways, in particular, by observing how the stars revolve around its center.

The data already collected by astronomers on the orbits of stars helped astronomers to discover a supermassive black hole Sgr A *, as well as to reveal the exemplary structure of the Galaxy’s arms and the so-called bridge, especially the dense cluster of stars in its center. 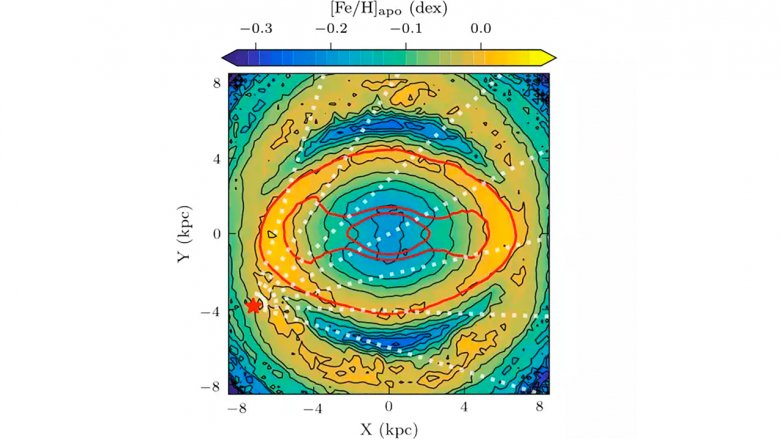 Similar observations are being made, in particular, in the framework of the APOGEE project, which aims to study the orbits of those stars that are hidden from our view by dense gas and dust clouds located between the Milky Way and its region of the solar system. Astronomers track the movement of these luminaries with the help of infrared and microwave telescopes, which do not interfere with interstellar dust.

Wiley and her colleagues recently analyzed data collected by APOGEE and combined it with data from the GAIA Orbital Observatory and several microwave surveys of the sky. This allowed scientists to obtain the most accurate three-dimensional map of the bridge and the neighboring regions of the Milky Way.

An analysis of this map unexpectedly revealed that the Galaxy’s bridge was surrounded by a giant ring of stars that differed markedly in their properties, composition, and age from other luminaries present in the central regions of the Milky Way.

In particular, these stars were younger than other objects in the bridge, and their bowels contained much more astronomical “metals”, elements heavier than hydrogen and helium.

The discovery of this group of luminaries, according to Wiley and her colleagues, indicates that the central regions of the Galaxy experienced several starbursts, one of which occurred about 7 billion years ago and led to the formation of a stellar ring discovered by scientists. Its large size and mass indicate that the center of the Milky Way continued to absorb matter from the intergalactic environment for much longer than many astronomers thought in the past, scientists concluded.