Being a tourist destination, Goa’s night life is a major attraction for the visitors. While entertainment is an important element for tourism, the loudspeakers blaring music from the pubs and restaurants in North Goa’s coastal belt are flouting all norms. Not only are these pubs playing loud music beyond the permissible time limit, but also much louder than levels permitted. Speaking to Sujay Gupta in the people’s edition of Point-Counter Point programme on Herald TV, some of the local persons who are affected by the nuisance of noise pollution bared their heart out on what is going wrong.

The party belt of Anjuna, Arpora, Chapora attract huge number of tourists, who revel in the music played from the restaurants, pubs and shacks in these areas. But in the garb of providing entertainment these commercial establishments are causing noise pollution, which has become a public nuisance and going unchecked.

The locals have been up in arms against the blatant violation of norms. Even the people’s paper Herald crusaded against the issue. The people are urgently seeking redressal to their grievance regarding the growing menace of noise pollution.

What is painful is the fact that the entire coastal belt in North Goa has been transformed from a sleepy fishing hub into behemoths of tourism. Because of this, students are unable to study, people can’t have conversations or relax due to the loud noise which is blared from the loudspeakers from evening onwards and continues till wee hours of the morning. This has disrupted the lives completely.

The Herald newspaper and TV which reported the issue at lengths recently, ruffled the feathers of these unsocial elements to such an extent that they even threatened our reporter Asmita Polji and a fellow journalist from another media organisation.

Asmita bravely made video recording of the incident. The matter will be pursued to ensure action against perpetrators and defenders of noise pollution and won’t be allowed to scot free. 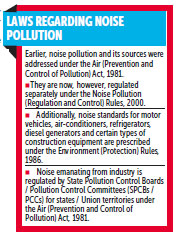 Sharing her experience, Asmita said that on March 26, local resident of Anjuna and activist Alisha D’Sa who lives in the heart of those clubs and restaurants causing noise pollution, called her and complained about the disturbance caused to her and people in her neighbourhood .

“I reached the spot to report on the issue. After covering the incident, I and a fellow reporter from another publication were leaving the spot when three people came out on to the road and started threatening the other journalist. I immediately started filming the entire journalist incident as evidence against them,” Asmita said.

The abusers were locals. They were known to the locals as well as the police. Immediately within 10 minutes after the incident happened, police complaint was registered.

“But even after 72 hours, the accused were not arrested. The excuse given by the police was the accused had escaped. The incident occurred on a weekend. On Monday the accused approached the High Court of Bombay at Goa and secured interim bail. The remained mute spectators to the entire episode. In fact, one of the accused is a history police sheeter and yet the police did not act. This shows that they could be hand-in gloves with the accused,” she said.

Alisha D’Sa who had sought help from Asmita said that this particular restaurant which was causing public nuisance had opened the outlet in her locality last December.

“We were initially told this was a just a restaurant and bar. No resident would face any kind of trouble, including loud music. But that was not to be. They started playing very loud music, which started at 5pm and continued way past midnight ,” she said.

The facility would attract large crowd and to in order to entertain them, it would play loud music. This caused lot of hardships for the local residents.

“Initially we thought this would be over after December as we know what the situation is in Goa during December every year. But this continued beyond December. The problems posed by the noise pollution had become unbearable,” Alisha said.

Elaborating on the problems she faced, the young resident of Anjuna said that she works from home for a US based company and her shift starts at 5.30 pm. The loud noise would hamper her work.

“The moment I sit for my work, there is loud music emanating from the restaurant. Even if we close all the doors and windows, it does not help. It is not possible for me to concentrate during the online meetings. My ear starts hurting and get headaches,” she said.

It’s not just her who suffers from this menace of noise pollution. Her elderly parents also have to suffer every day.

“My father has diabetes and mother suffers from high blood pressure. For them, it is even more difficult to deal with the situation. My father has taken retirement due to health issues so that he could rest. But due this restaurant, it has become Virtually impossible for him to take rest. In the evenings we are unable to sit out in the open and relax. All our evenings are ruined and we are forced to remain indoors,” Alisha said.

When asked about what motivated her to pursue the matter with the media, she said that the police had already been approached earlier. But nothing happened.

“We approached other authorities like our village sarpanch, the deputy Collector, but nothing happened. I called on the 112 helpline. Initially when the police came, they used to reduce the noise levels and increased it once they left. Gradually when complaints became frequent , they stopped even taking the police seriously. That’s when I read news reports on noise pollution in the Herald and called Asmita,” she said.

Narrating an incident, she said that once when the local residents went together to register complaint with the police against this particular restaurant, the Police Inspector called the restaurant owner and warned of action for causing disturbance.

“That particular evening the noise levels were low. But things were back to square one from the following evening onwards. When i called the police again, the constables would come, the noise would reduce. But once they left it would increase again. All this has been happening since this March,” she said.

It is ironical that while people from all the country and abroad come to Anjuna for enjoying themselves, the locals are virtually under house arrest.

The locals have leased their lands to tenants who open restaurants and pubs on them. But all the licenses and permissions are given to the landlords, who are locals. But these landlords are oblivious to the problems posed to their own brethren.

Another resident of Anjuna, Michael Fernandes, who too has faced similar problems, said the locals have been staying here since ages and doing their businesses very smoothly even before the restaurants and pubs came up.

“It is because of these restaurants, noise levels have gone up substantially. Local economy does not depend upon them. We would be happiest if they shut shop and go away. But that is not we want. We just want peace of mind. We want this loud music to stop. Most of these businesses are run by outsiders. There would be hardly 10 per cent locals,” he said.

Fernandes said that the local residents had shared their fears of a disturbed neighbourhood with the landlords and their tenants. Initially they allayed the fears of locals.

“But once the facilities started, loud noise started reverberating in the entire area. The landlords backed out from their promises after we started complaining to them. They don’t meet us now, don’t talk to us and even avoid us. Tenants are least bothered. The problem has started since last December. During pandemic, there was no commercial activity. In pre-pandemic time these establishments did not exist in our vicinity,” Fernandes said.

Speaking on this issue, Advocate Gaurish Malik, who had filed a writ petition in the High Court of Bombay at Goa on behalf of his client regarding to seek directives against those guilty of causing noise pollution last year said that his client also faced similar issues.

“So we decided to issue legal notices to all the authorities and we had given them a particular time period to stop the music. One of the shacks from the area which was playing loud music was issued notice and told to stop within 48 hours. But there was no action taken. So, we filed a writ petition before the honourable High Court of Bombay at Goa, which gave crucial directives,” Malik said.

The final order by the court last December is elaborate, wherein helpline number is given. It also laid down the procedure for the common public to follow when faced by poise pollution related issues.

“For noise pollution, there are no clear legal procedures laid down. But in this case, the High Court order clearly spelt out the process for the common man on how to approach the authorities with this kind of problem,” Advocate Malik said.

When asked as to why the authorities are unable to crack down on violators of Noise Pollution Act and Environment Protection Act and whether there is any recourse available for the people apart from police complaint, the legal expert said that the High Court order has given comprehensive guidelines for the authorities.

“The authorities need to do anything different. They just have to follow and implement the guidelines given in the order. Automatically results would show,” he said.

When Herald intervened into the issue of noise pollution, it struck a raw nerve resulting in retaliation from the offenders. The judiciary has specified the action needed to be taken, the media is doing its duty diligently by pursuing this matter relentlessly. It is now up to the State to show urgency in this matter and be a party to this campaign against noise pollution.

The State needs to instruct every arm to act as stakeholder in this fight against menace of noise pollution, which is harming the public at large.