In this interview, we speak to Erika Manczak, Ph.D., an Assistant Professor in the Department of Psychology at the University of Denver, about her latest research into the link between air pollution and depressive symptoms in adolescents.

Please can you introduce yourself, tell us about your background in psychology, and what inspired your latest research?

I’m Erika Manczak. I’m an Assistant Professor in the Department of Psychology at the University of Denver. My background is in research that connects biological processes to risk for depression in families and I’m also a licensed clinical psychologist, meaning that I both research and treat mental health issues.

I was inspired to conduct this research by growing recognition of the ways in which our physical environments can affect our physical health, including increasing risk for things like asthma and cardiovascular disease.

As a psychologist specializing in biological risk pathways, I recognized that many of the same mechanisms that likely contribute to those physical health outcomes also increase the risk for depression. For example, inhaling ozone can contribute to cellular inflammation both in our airways as well as throughout our body. In separate research, this systemic inflammation has been associated with increased risk for depression.

Looking at these bodies of work, it seemed logical to me that exposure to ozone might therefore also increase risk for depressive symptoms.

Ozone from air pollution is known to cause both physical and mental adverse effects on the body. What exactly is ozone, how and from what is it emitted, and what ailments can high levels of ozone cause if humans are exposed to air pollution over time?

Ambient ozone is a gas that occurs when certain pollutants like Volatile Organic Compounds and Nitrogen Oxides react to sunlight. As a result, ozone is a ubiquitous part of our air quality, but its concentration can differ as a function of things like density and the use of gasoline and diesel vehicles. High levels of ozone can lead to inflammation and damage of the lungs, raising the risk for things like asthma attacks.

Furthermore, this can encourage inflammation throughout the body, leading to many other potential health consequences. Some research using animal models also suggests that ozone exposure can affect the activity of neurotransmitters and can contribute to the expression of inflammatory proteins in certain parts of the brain.

Your research is the first study that links high ozone levels to the onset of depressive symptoms in adolescents over time. What are these depressive symptoms, and why do you believe that it is important to study the effects of ozone on our mental health?

Common depressive symptoms include things like low mood, a lack of interest or pleasure in things that used to be enjoyable, and social withdrawal (along with many others).

Looking at the number and severity of depressive symptoms—as opposed to just looking at whether someone meets full criteria for Major Depressive Disorder—allows us to potentially catch risk at earlier stages. That is, looking at symptoms allows us to understand the development of risk, instead of just the disease outcome.

Ozone and other components of air pollution are known to contribute to high levels of bodily inflammation. Why is it that adolescents may be particularly affected by the effects of ozone and air pollution?

Adolescents tend to spend more time outside compared to people in other age groups; thus, it’s likely they would have higher ozone exposure. Furthermore, adolescence is a time of increased risk for depressive symptoms, where exposures may have an even greater effect on mental health outcomes.

Your research analyzed data from a previous study to assess the link between mental health and the air quality of adolescents over a four-year period. Can you please explain the data you analyzed, as well as the results that you found?

This research combined two fantastic data sources—publicly-available data from the California Environmental Protection Agency, which estimated ozone exposure for different regions of the entire state of California, and a longitudinal study of adolescence, which followed teenagers closely for approximately 4 years and was able to collect nuanced data about symptoms in those individuals over time. By mapping ozone levels onto our adolescent participants’ home addresses, we were able to examine average ozone exposure in their census tracts.

Your findings revealed that the average level of ozone was fairly low even in the communities with relatively higher ozone exposure, yet adolescents who lived in areas with these relatively higher ozone levels showed significant increases in depressive symptoms over time, even though the neighborhoods met air quality standards. What does this suggest about the adverse effects of ozone levels on our health?

I think these findings are in line with other research showing that even exposure to levels of ozone that are under the limits set out by air quality standards may still be associated with negative health outcomes. In turn, this would argue that we may want to consider revising those standards to better safeguard health.

The results of your research show a correlational relationship between ozone levels and the onset of depressive symptoms; however, it is also possible that other components of air pollution besides ozone could play a role in your findings. Can you shed some light on what these other components may be?

Much more work is needed to better understand and contextualize our results. For example, we only looked at ozone as an indicator of air quality, however, there are many other pollutants to potentially consider, such as particulate matter, Nitrogen Oxide, airborne lead, etc. Examining the composition of air pollution more comprehensively will be important for clarifying specific associations and helping further research that can trace the biological cascades through which this risk may operate.

Even low levels of ozone exposure pose potentially serious risks to both physical and mental health, and the World Health Organization (WHO) estimates that each year 4.2 million deaths can be attributed to ambient air pollution. Do you believe that ozone-related ailments could continue to worsen in years to come if nothing is done to prevent them?

I absolutely believe that, without intervention, ozone and air pollution-related ailments will worsen in years to come. Historically, there has been an attitude that risk associated with these types of exposures can take a long time to accumulate. However, our work is pointing to the possibility that even shorter-term exposures (on the scale of a few years) may translate into meaningful health differences.

Air pollution often disproportionately affects marginalized communities, with ozone levels potentially contributing to health disparities. What can people do on a community level to reduce their own individual ozone exposure, and what do you think needs to be done at a higher level to combat air pollution ?

Of course, the most important interventions will likely happen at a societal level through efforts to reduce contributing pollutants, such as limiting emissions on gasoline and diesel vehicles and developing clean, renewable sources of energy. Likewise, our local governments can improve transparency about levels of daily pollution and improve communication to communities on days when ozone or other pollutants are high.

At an individual level, one of the best recommendations would be to pay attention to your local air quality and to limit outdoor time and unnecessary driving/fueling on days when air quality is bad.

What are the next steps for you and your research?

I’m very excited by some new collaborations with atmospheric and environmental scientists. We’re hoping to extend this work by replicating these findings in a different sample and geographic area while beginning to examine some of the biological processes that we believe may underlie our associations .

Where can readers find more information?

Erika Manczak is a clinical psychologist and Assistant Professor at the University of Denver. Prior to this, she completed her undergraduate degree at 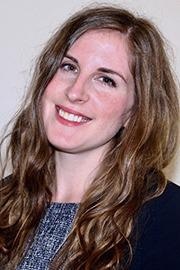 Cornell University, her Ph.D. in clinical psychology at Northwestern University, and a postdoctoral fellowship at Stanford University. At the University of Denver, she directs the Biology, Environments, and Mood Studies (BEAMS) Lab, which seeks to identify biological, social, and physical contributors to risk for depression in families.