Kirill invested in the seventh consecutive victory of “Minnesota”, but was left without a club record and double.

Russian striker Kirill Kaprizov has released another powerful game and helped Minnesota win over Philadelphia. He has a winning puck, but Kirill still has grounds for dissatisfaction. The referees canceled his second goal, which would have been very important for the Russian striker.

From match to match, the Russian reminds the hockey community and Minnesota fans that the Brazilian series with a long contract was worth all the experience. Kaprizov feels at home, his teammates admire his talent, and after each successful match there is a fan who writes on social media that he still can’t believe that the Russian plays for Wilde.

However, Kaprizov plays great not only by Minnesota standards, but also against the background of his stellar compatriots: he confidently holds the title of the best Russian scorer in the NHL, occupying seventh place in the overall list. Connor McDavid has 16 points, but the chase for the Canadian is not in Caprice’s priorities.

Now he is busy to ensure that “Wild” has a smooth exit to the playoffs, which the team rightly hoped for all season, but in February failed miserably. To regain lost ground, Minnesota can not afford to relax in any game, so every meeting – a battle more than just for victory.

Kaprizov’s cool game helps to regain self-confidence. He is the undisputed leader on the ice, leading the team forward and terrifying opponents, especially when playing in the majority. It was the Russian who managed to realize the extra player in the meeting with “Philadelphia”, which took place on Wednesday night. In the first period with a score of 1: 0 in favor of “Minnesota” Kirill received a puck from a teammate at the throw-in circle, abruptly moved to the left to make room for a throw, and found a loophole in the goal goal. This is the tenth goal of the season for Kaprizov with a numerical advantage, which became his new personal record in the NHL. 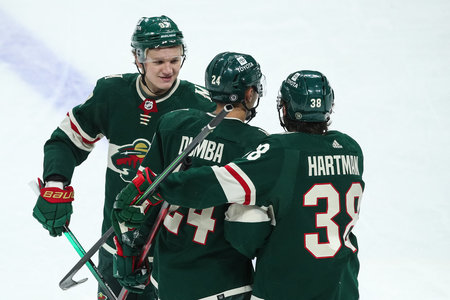 In the second period, his teammates almost brought the case to defeat (4: 0), and in the final twenty minutes allowed “Philadelphia” to score a goal of prestige.

By the way, Kaprizov could have become the author of the double, but it didn’t work out: the goal was canceled due to an obstacle to the goalkeeper. Philadelphia defender Travis Sunheim and savages striker Ryan Hartman, who accidentally stepped on the goalkeeper, fought during the Russian’s long throw. Due to this, according to the referee, Martin Jones could not react in time to Caprizov’s throw.

The cancellation of the goal is doubly insulting because it would mark the Russian’s record for “Minnesota”, or rather, its repetition: no one but Marian Gaborik 14 years ago, did not score 83 points for the season in the “Wild”. Now Kaprizov has 82 (37 + 45) points, and, without a doubt, the record of the Slovak hockey player will be updated in the near future. “Minnesota” together with Kaprizov caught the courage and is rushing to the coveted playoffs. The team took a confident second place in its division, winning seven matches in a row, with the Russian leader scoring points in six of them.