“They pray on the street – there is not enough space,” – explained today the need to build a cathedral mosque for 10 thousand. Believers of the Mufti of the Republic of Tatarstan Kamil Hazrat Samigullin. The temple will become a spiritual center, next to which an Islamic cluster will appear. Manzara Park and the neighboring forest park will not be touched. But the filling of the Kazanka near the “Bowl” with an area of ​​14 hectares remains in the plans – now for the sake of the park. They are also looking for a place for “Curly 2.0”. Construction of the mosque will begin this year, but it is unknown when it will be completed. The sanctuary does not have a name yet: it will be named after consultations with the clergy and residents. Details – in the material “BUSINESS Online”.

The cathedral mosque has found a place in Kazanka: there will be built a prayer hall for 10 thousand. man with spiritual center and car park

The Kazan Cathedral Mosque will be built on the site of the Kirlay amusement park. This was announced today in Tatmedia by the head of the Cabinet of Ministers of the Republic of Tatarstan Shamil Gafarov. In the same place in the presence of the Mufti of the Republic of Tatarstan Camilla Samigullina and the head of the executive committee of Kazan Rustem Gafarov announced an open international competition for the best architectural concept of the temple. The participants of the competition have an area of ​​8.2 hectares – such an area is occupied by “Kyrlay”, it is necessary to design a prayer hall for 10 thousand. man, spiritual and educational center, as well as a car park with enough space.

“The minimum number of 10,000 people should not scare anyone. In order not to be accused of gigantism, I will give examples, “said the mufti of the Republic of Tatarstan. For example, 10 thousand. The Moscow Cathedral Mosque and the Sanctuary of the Heart of Chechnya are designed for people. At 30 thousand a mosque was built in the Chechen city of Shali, and 50,000 people are being built in Makhachkala. believers.

The construction of the Kazan Cathedral Mosque will begin this year with donations, but the amount of costs and deadlines for the completion of construction have not yet been announced. “We will make every effort to build a cathedral mosque as soon as possible,” Gafarov said. – There are realities, building codes that should not be violated during the construction of facilities. I would like to open the Cathedral Mosque this year, but it does not happen. “

The construction customer is the Igelek-Dobrota Republican Foundation, the supervisory board of which is headed by the President of the Republic of Tatarstan. Rustam Minnikhanov. The foundation stone of the cult building will be laid on May 20, the day before the 1100th anniversary of the conversion of Islam by Volga Bulgaria.

“There is a need for a large platform where we can gather together and pray,” Samigullin said. – Today is Friday and if you go to the nearest mosque, you will see people praying in the street – there is not enough space. The weather is cool, not always summer. Praying people need a big mosque. “


The mosque is not only a place of prayer, it is a spiritual and educational center for Muslims, Samigullin stressed
Photo: BUSINESS Online

The architects will take into account the neighboring territories in the project, and the name will be discussed with citizens, clergy and experts.

The results of the architectural competition with a prize fund of 4 million rubles will be announced in early July. The winner will be awarded 2.5 million rubles, for the second place will be given 1 million rubles, 500 thousand. – for the third. The geography of the participants is not limited. The jury will include architects, representatives of the scientific community, the Muslim clergy, government and municipal officials.

The contestants will have to work not only on the mosque, but also on the surrounding area, which includes the already designed Manzara Park, as well as the Islamic cluster, which will replace the TNV headquarters project. The task for architects does not specify the height of the minarets, the area, preferences for facade solutions, style. No specifics were voiced. 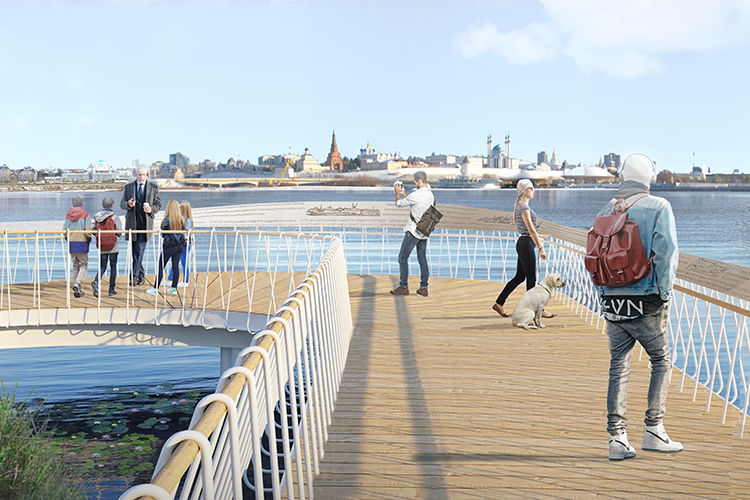 “We will not wash the shore!”: Minnikhanov was shown new parks near Kazanka

“Certainly did not make specifics in the terms of reference, thus leaving the latitude for the participants,” – said the executive director of the Republican Foundation “Igelek-Dobrota” Ilnur Rakhimovadding that the park is part of the buffer zone of the Kazan Kremlin and is protected by UNESCO.

The mosque is not only a place of prayer, it is a spiritual and educational center for Muslims, Samigullin stressed. “There should be various sites: a museum, for conferences, children’s camps and so on,” – said the wishes of the muftis of the Republic of Tatarstan. The name of the new mosque will be chosen taking into account the opinions of citizens, clergy, experts. “We will consult,” Gafarov said. 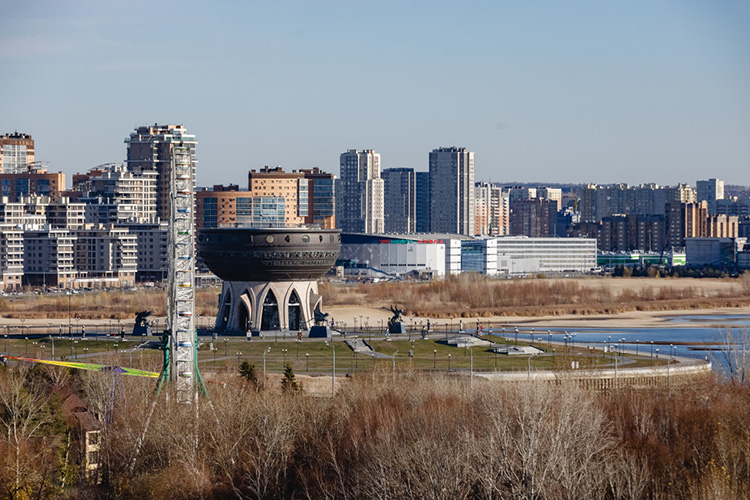 Horizon Park, designed by French landscape architect Michel Pena, is planned to be located on the stretch from the Riviera to the Bowl.
Photo: BUSINESS Online

The mosque was moved, but the alluvium near the “Bowl” remains – there will be a park, the trees behind the “Kirlay” will not be touched

The construction of a mosque on the site of the Kirlay Park will not require backfilling of the Kazanka water area. We will remind, earlier planned to place a sanctuary at “Bowl” with creation of artificial land plots. At the same time, plans for backfilling remain – on April 11 there will be public discussions at the cultural center “Moscow”. And this is the most amazing thing: what’s the point of putting Kazan to sleep now? Why spend hundreds of millions of rubles on the budget?

“The materials of the public hearings say:” Park “, – said the head of the Government of the Republic of Tatarstan to the question” BUSINESS Online “about the plans for backfilling. – I think it will be right. From my bell tower: the right and necessary solution. In the center of Kazan will be another place of rest not only residents but also tourists.

The head of the Kazan executive committee also confirmed plans to improve the park near Chasha. “There are not enough parks in this part of the city,” Gafarov said, adding that the area will be part of Kazanka’s 12-park development strategy.

On the section from the “Riviera” to the “Bowl”, we recall, plan to place the “Park of Horizons”, which was designed by a French landscape architect Michelle Pena. However, the project did not envisage the creation of new land plots. And what is the point of straightening the shoreline, if the architect perfectly beat the bays around the “Kazan” without any filling Kazanka? 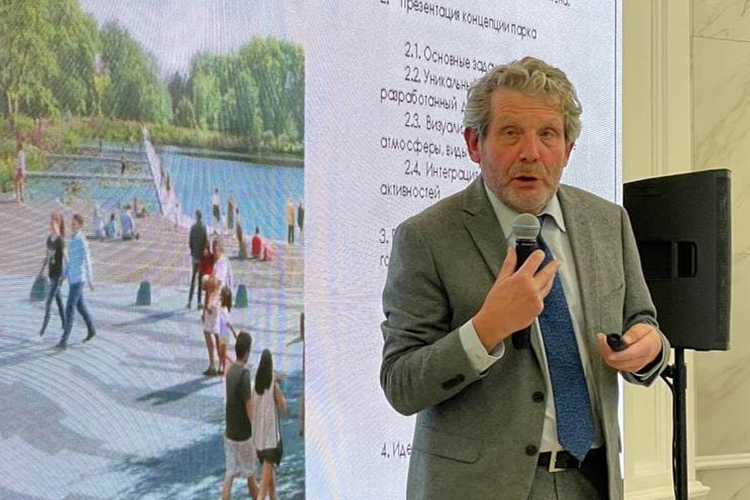 If we had been told 10 years ago that Michelle Pena would come to us, I would have said, “Not in my life.”

The day before, the residents of the Kazan Su residential complex near the Kyrlai Park applied to the BUSINESS Online editorial office. Citizens have already sent more than 30 appeals to the Internet reception of the President of the Republic of Tatarstan, in which they oppose the construction of a large facility near residential buildings and ask to preserve the park area. The same letters were sent to the President of the Russian Federation Vladimir Putin, to the prosecutor’s office.

“The entire surrounding area will remain a park. A park zone and a mosque are being designed, which will harmoniously complement each other, – the head of the executive committee of the capital of the Republic of Tatarstan answered the question of the BUSINESS Online correspondent regarding the dissatisfaction of Kazan Su residents. – Why was this place chosen? We believe this is the most worthy place for the Cathedral Mosque. “ 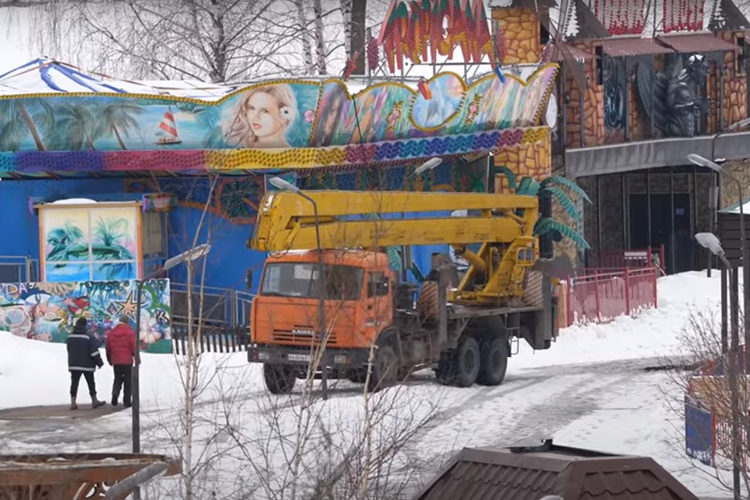 A crane, aerial platform and a loader are already operating on the territory of Kyrlai
Photo: Eugene Jura

“Kyrlay” has already lost “Flying Saucer” and “Children’s Paradise”. But the city will not be left without an amusement park – they are looking for a new place

We will remind, Kirlay park was opened in 2004 with participation Mintimer Shaimiev. The park’s website states that during the ceremony, the first president of the Republic of Tatarstan “planted a young tree as a symbol of longevity, power and goodness.” Initially, the park was called “Shurale”, in 2009 it received its current name. A total of 30 attractions and entertainment venues.

Initially, the park belonged to a well-known TV presenter, and later to the press secretary of the President of the Republic of Tatarstan. Andrei Kuzmin. But after the bankruptcy proceedings, the owners became structures close to Ak Bars Bank. The bank itself responded to the request as follows: “Ak Bars Bank has not supervised Kirlay Park for a year. You need to contact them directly. ” On the phone JSC “Parkinvest” also declined to comment. 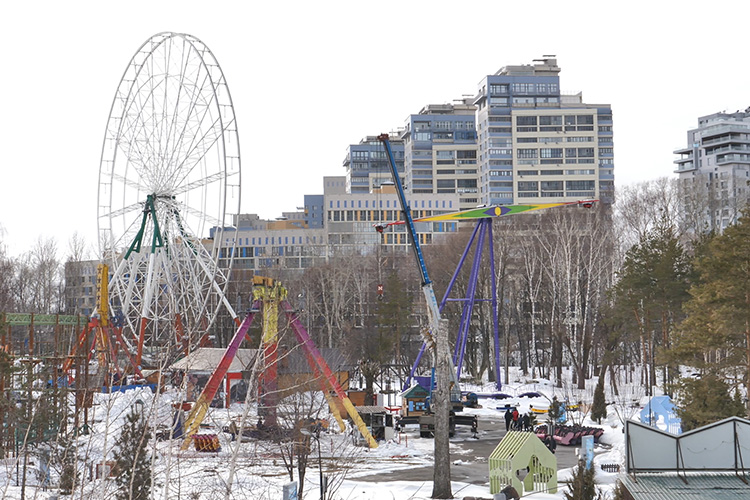 The booths were removed from the Ferris wheel, the “Flying Saucer” lost a bowl and chairs, there are no seats and the chain carousel, the carousel “Children’s Paradise” was dismantled
Photo: Eugene Jura

The land plot under the amusement park is owned by the municipality, which Parkinvest rents from the city. The head of the executive committee stated that a new territory would be selected for the amusement park. “Kazan will not be left without an amusement park,” Gafarov said. “I assure you – the park will be with new, good attractions.”

Meanwhile, blue construction trailers, workers and heavy equipment have already appeared in the park. The crane, aerial platform and the loader works. The booths were removed from the Ferris wheel, the “Flying Saucer” lost its bowl and chairs, there are no seats and the chain carousel, the “Children’s Paradise” carousel was dismantled. “Yes, they are demolishing and cleaning the park,” the guard said, not letting BUSINESS Online correspondent into the territory.