Alexander’s goal brought victory to “Washington” in the match against “New Jersey”. And the captain himself, according to various indicators, was equal to two NHL legends at once.

There is no more intrigue in the Eastern Conference in the fight for the playoffs, but Alexander Ovechkin plays in every match as if everything depends on the outcome of the meeting. He is not only focused on individual achievements, but he is still hungry for victory.

In the home match against “New Jersey”, the Russian again helped “Washington” by throwing the winning puck. The goal against the Devils brought the Caps two points, and Ovechkin two historical achievements at once.

“Washington” is on Ovechkin’s shoulders

Absolutely all goalkeepers and defenders in the league know how Ovechkin will act in the majority. However, every time you draw an extra Ovi, you manage to use your signature throw. This is the greatness of the captain of “Washington” – no one can stop him from steadily throwing puck in the game “5 on 4”.

Team partners Yevgeny Kuznetsov and Niklas Backström are well-adjusted to Ovechkin and know at what point to give him the puck. The forwards feel great for the captain and provide him with perfect passes, after which Ovi does not need extra time to process the puck.

However, on Ovechkin’s goals alone you will not go far in the playoffs, so the club’s management actively worked on the deadline. The Caps sent Daniel Spring to Seattle in exchange for striker Marcus Johansson, who was already part of the club from 2010 to 2017. In addition to Johansson, the composition of “Washington” was joined by veteran Johan Larsson. The Swedish hockey player is an efficient and reliable striker for the lower echelons. But if Johansson is already playing for the “capital”, then Larsson is not yet in the application due to injury – recovery from surgery at the beginning of the year is not over.

“Washington” seems to lack its own injured hockey players, who have not received playing practice for a long time. The Caps are currently out of midfielder Nick Dowd due to injuries, and defenders Carl Hagelin and Trevor van Rimsdick have not appeared on the ice for a long time.

However, so far “Washington” with the help of Ovechkin manages without them. In the match against New Jersey, the captain again showed leadership qualities.

Two records in one shot

From the first minutes of the match, it could seem that “Washington” has solved all the tasks and is waiting for the return of injured players to prepare for the playoffs. Very impressively, the Caps players moved on the ice and gave the opponent complete freedom. The Devils were able to take advantage of Washington’s lack of motivation.

After two periods, the hockey players of “New Jersey” not only had an advantage in the score – 2: 1, but also looked better than the opponent in the game. “Washington” in the break before the third 20 minutes remembered their championship ambitions, and another team returned to the ice.

First, Connor McMichal equalized, then Backstrom brought the capital ahead. After the goal of the Swedish striker, the audience sprinkled ice with toy apples. The fact is that Backström has surpassed the 1,000-point mark, the lion’s share of which are assists. And in America, hockey slang fans call the pass that led to the discarded puck “apple.” 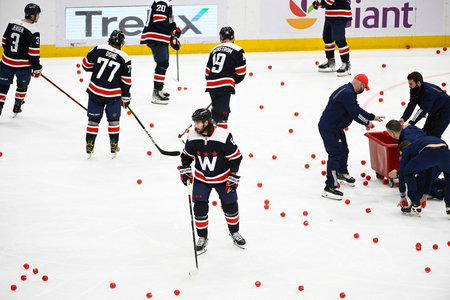 Well, the point in the match was set by the captain of “Washington” – Ovechkin again realized the majority. Kuznetsov helped him, who found Ovi on the far post with a great pass. For Alexander, the puck became the 42nd in the season, and now he is ranked 21st in the list of top scorers (1398 points) in NHL history, equal to the legend of Finnish hockey Jari Kurri.

Later, the “devils” played one puck, but they could not save the match. At the same time, the goal of “New Jersey” played into the hands of Ovechkin – the puck of the captain of “Washington” was the winner. Thus, Ovi, like Gordy Howe, now has 121 goals in his career, which is the second result in NHL history. 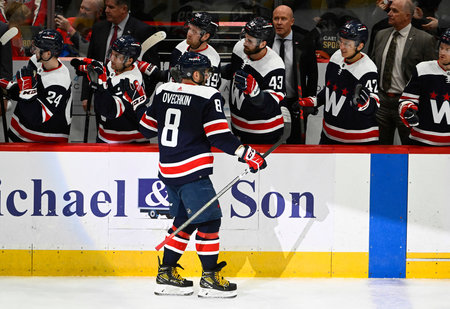 As a result, “Washington” turned the tide of the meeting and beat “New Jersey” – 4: 3. Ovi brought victory to the capital’s club and proved once again why the captain’s stripe is adorned on his jersey. Ovechkin also confirmed his status as a unique hockey player – only he can update two historical achievements with one throw.