Fans of the opponent insulted the Russian striker, and he staged a real show. Conducted haters and sent hearts.

The captain of “Washington” Alexander Ovechkin is not only one of the brightest forwards of all time in hockey, but also a great showman. Through his actions on and off the ice, Ovi has won the love of millions of fans around the world. However, what is good for “Washington”, for his rival is akin to disaster.

In the last match of the regular season, New York Rangers fans gave Alexander a real test of psychological stability, chanting insults against him.

Ovi’s reaction to the provocation is astounding!

Repeated provocations ended in nothing

The NHL regular season match between Rangers and Washington took place in the home arena of the Blue Shirts and had no tournament significance for the teams. They could no longer change their positions in the table of the Capital Division, and they certainly wanted to save energy. In this regard, many leading players did not even go on the ice.

Alexander Ovechkin did not take part in this confrontation, but on medical grounds. In a recent match against Toronto, the player was injured by hitting his left shoulder on the board. But the hockey player decided not to miss the last games of his team, supporting it in the stands. In the away match against the Rangers, he was given a place in the press box, where he followed what was happening.

In the middle of the second period, when “Washington” came forward, Ovechkin decided to patrol the stands of “Madison Square Garden”. The Russian forward raised his hand to his ear, hinting that the fans of “New York” are inaudible. The answer did not take long.

This action lasted about a minute, but the Russian hockey player was not angry, but, on the contrary, reacted to the situation with humor. The hockey player began to conduct the fans, setting the pace with a wave of his hands. To make the audience insulting him sound louder and more cohesive. He smiled and looked pleased, continuing to troll the haters.

Then Alexander gestured to the fans to stop chanting, after which he shook his head, hinting that they do not really manage to touch him.

The shouts against Ovechkin continued after the second leg of the match. The video showed Alexander walking into the podium to the insulting shouts of fans, but it only amused him. He showed them his thumb up and sent hearts. 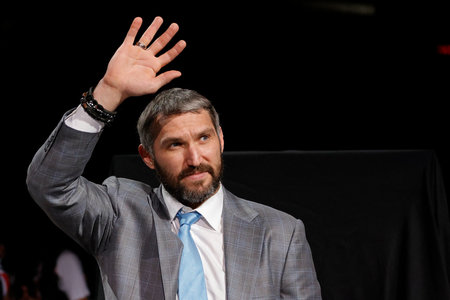 Somewhere in Florida, a team was saddened

The video of the incident with the Rangers fans from different angles clearly shows that Ovechkin is in a great mood. He waves both hands lively and without restrictions. Most likely, the injury to the shoulder joint, received in the game with “maple leaves”, no longer worries him.

So, with a high probability, Alexander will go on the ice in the series from the first round of the Stanley Cup playoffs with “Florida”. And the “Panthers” are certainly not happy about this circumstance. Even with Ovechkin, “Washington” will not be the favorite of the confrontation, but without the captain, the “capital” simply has no chance.