“Washington” lost at home to “Dallas” – 2: 3, but fans of the capital team still have reason to rejoice – Alexander Ovechkin continues to update personal records and rewrite the history of the NHL.

The captain of “Washington” repeated the achievement of the legendary Wayne Gretzky and took the second place in the history of the NHL on an important indicator.

“Washington” is firmly established in the playoff zone and is unlikely to leave it. The “capital” has fulfilled the task at least and the remaining games in the regular season can be useful – to fix the game in unequal formations and allow the team leaders to recover.

Washington has almost solved the problem with the majority. At the beginning of the year, the team ranked 27th in the league on this indicator, and this month was on the second line in the implementation of the excess. And if the game in unequal formations is no longer a problem for Ovechkin’s team, then injuries seriously complicate the life of “Caps”. “Washington” has not played a single game this season in the optimal lineup, each time in the list of injured someone is listed.

The day before, in the game against Columbus, TJ Oshi left the game with a lower body injury, he did not play in the last match against Carolina and missed the meeting with Dallas. Also, the “capital” can not help now due to health problems, center forward Nick Dowd and defender Trevor Van Rimsdike.

Despite the obvious holes in the lineup, “Washington” keeps afloat all the time. This is largely due to Ovechkin, who even in such a difficult season for the team with astonishing regularity scores goals and breaks all sorts of records. Therefore, it is not surprising that the Caps fans are happy for their captain, even when the team loses. Even today, “Washington” lost to “Dallas” in all respects, but the puck and records of Ovi overshadowed the defeat.

Ovechkin caught up with Gretzky

The Dallas hockey players ran to win the away match immediately after the starting throw-in. Already in the third minute of the meeting, the guests took the lead, Alexander Radulov himself distinguished himself in the “stars”. The Russian does this very rarely and has not spoiled the audience with his goals for a long time – the puck became his fourth for the season. And at the end of the period, Roope Hintz ran away and realized a one-on-one.

For “Washington”, the period turned out to be extremely weak. The “capital” had more time to rest after the previous game, but they looked tired and slow against the opponent. During the entire 20-minute start, there was no hint from the Caps hockey players of a dangerous attack, although the “capital” played in the majority three times. However, even in this situation, Ovechkin managed to break another NHL record – Ovi became the second player in the history of the league, who made 6,000 shots on goal.

In 2018, the captain of “Washington” made the fastest 5,000 shots in the history of the league. Since then, he has only continued to move up this indicator.

The second period began with the removal of “Dallas”, and “Washington” got a chance to reduce the gap in the score. Ovechkin coped perfectly with this task – with the transfer of Yevgeny Kuznetsov, Ovi from his “office” made a powerful throw and realized the majority.

Thus, the captain of “Washington” for the 12th time reached the mark of 40 goals per season and equaled Gretzky in this respect. In addition, Ovechkin added to the list of goalkeepers he scored – Jake Oettinger, the 155th goalkeeper to pull the puck out of the goal after Ovi’s throw.

A few minutes after the anniversary puck, Ovi “Dallas” decided to spoil the holiday for the captain and fans of the “capital” and regained the advantage of two puck. The Caps were able to answer only in the middle of the third period – defender Dmitry Orlov hit the goal with a powerful throw and instilled hope in the team. The “capital” did not receive the impulse and could not find the strength to win back. 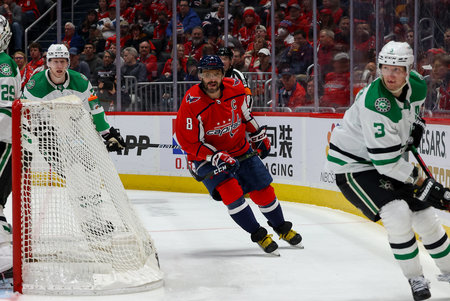 And at the end of the period, “Washington” changed the goalkeeper to the sixth player to try to organize the last assault in the game. However, instead of a beautiful denouement, the “capital” got another injured. 20 seconds before the end of the match, guest forward Jamie Benn made a dangerous step for John Carlson. The veteran crashed hard on board at high speed and could not get off the ice for a long time.

The match itself ended with the victory of “Dallas” over “Washington” – 3: 2. Ovechkin had another great match and does not think to stop there. The Russian’s records are all that the Caps fans have after the match. The “capital” themselves have solved the tournament task and can afford to play a little on Ovi to help him jump records.