The women’s relay pleased with entertainment and struggle to the last frontier.

At the Russian Biathlon Championships in Tyumen, we finally waited for the classic relay. The kind of program that is traditionally bathed in popular love. The girls were the first to start.

Well, since the current tournament is open, each spectator could choose not only the team from the region for which they want to support, but also to worry about all the Russians in the confrontation with the national team of Belarus.

The race turned out to be dashing and intriguing to the last limit. Kristina Reztsova finally managed to shoot and brought victory to the Khanty-Mansi Autonomous Okrug-YUGRA-1 team.

The women’s relay allowed us to see Svetlana Mironova and Irina Kazakevich in the case of silver Olympic medalists. They missed the mixed relay because the Sverdlovsk region was missing one man in the application. But now the composition of this region looked almost the strongest.

Traditionally, at open Russian tournaments a lot of attention is paid to the team from Belarus, but in the women’s relay there was a lack of experience among athletes in the last two stages (Sola, Leshchenko, Kovalevskaya, Kudayeva). This could disappoint the team from the neighboring country.

In addition, great expectations were placed on the biathletes from Khanty-Mansi Autonomous Okrug-YUGRA-1, with killer Kaplina and finisher Reztsova. In total, 11 teams went to the race.

At the starting stage, the one who returned to the sport after the Yurlov-Percht decree proved to be the brightest at the border. She worked both shots cleanly and quickly and showed that this component is no worse than potential competitors for a place in the main team. 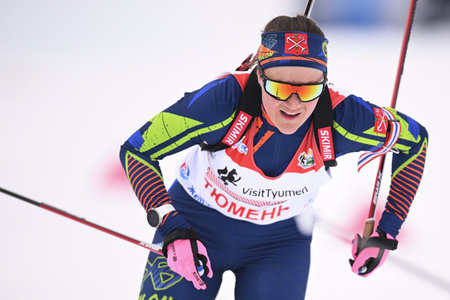 However, Ekaterina’s speed cannot be called optimal, so Kaplin, Mironov and Solo, who made mistakes in the firing position, did not allow the athlete from St. Petersburg to break away. After the first stage, the expected three leaders were formed – Khanty-Mansi Autonomous Okrug-Yugra, Sverdlovsk region, St. Petersburg. Belarus was a little far away.

Shooting from a supine position in the second stage did not significantly change the situation, except that Ekaterina Noskova (KhMAYU-YUGRA) left a short break and sought to increase her advantage over the next round. However, two misses on the shooting range did not strengthen the advantage. In 20 seconds there was Leshchenko, then the team of the Moscow region, which escaped to the third position.

There was a problem with the Sverdlovsk team: Antonina Kirsanova drove into the penalty area and was already one and a half minutes behind. A big problem for Kazakevich.

Noskova gave a strong last lap, increasing the gap in front of the Belarusian biathletes to almost 30 seconds. Vladislava Gavrilova had a clear plan – to keep the lead for the finisher Reztsova. This responsibility almost ruined her: on both borders she made three misses, but still did without circles. But the young Kovalevskaya (Belarus) and Vivdenko (Moscow region) failed to work on the shooting range, grabbing two and one free throw on the first line, respectively.

These mistakes of the leaders allowed Tinyakova (Moscow region) and Kazakevich (Sverdlovsk region) to come in second and third place. Irina did an incredible thing, adding a move on the track and reducing the gap to 15 seconds.

The expected confrontation between Khanty-Mansi Autonomous Okrug-Yugra against the Sverdlovsk region turned into a struggle between Reztsova and Derbusheva. Christina’s advantage in speed was expected to offset the difficulties at the border, although Tamara tried her best and closed all 10 targets without a single additional cartridge. 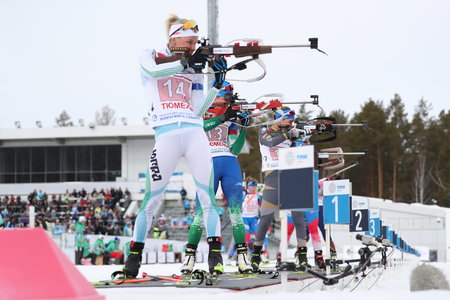 Indefatigable Reztsova finally became the champion of Russia in 2022 and reminded who is the best biathlete in the country at the moment. The Sverdlovsk team came in second. In the battle for bronze, Anna Nikulina brought a medal to the team of the Siberian and Far Eastern federal districts.