The second day of the Russian championship in Tyumen turned out to be no less amazing than the starting one. In the single-mix, a “veteran” podium was formed with a bright victory for Yurlova-Percht, who returned to the big biathlon the day before. In the mixed relay, Belarus rehabilitated for a failed sprint, once again ahead of the Russians. Nevertheless, the main hero of the day was Christina Reztsova, who again surprised biathlon fans with her antics.


“I still don’t believe it.” The winner of the Russian Biathlon Championship cried at the finish

This is the return!

The first team of St. Petersburg was the unequivocal discovery of the single mixed. If Maxim Tsvetkov was obviously in good shape and was a strong member of the team, the appearance of Ekaterina Yurlova-Percht, who only resumed her career the day before and did not run very well in the sprint, was a cause for concern. Who knew that on the second day Catherine will be on the podium with Maxim and even with a gold medal in his pocket. St. Petersburg gave a brilliant race, winning with a big, almost 30-second advantage. The duo’s shooting was excellent – only three misses. After Yurlov-Percht, she admitted that she hoped to get on the podium.

“I will reveal a little secret, I really hoped for this relay, because I know that Maxim shoots very well. In terms of emotions after the Olympics, he is in good physical shape, so everything could have worked out, ”said Ekaterina.

Yurlova-Percht: resumed her career without any thoughts about the next season

Almost the entire race of Yurlov with Tsvetkov fought with other, we can say, veterans of biathlon – the team of the Tyumen region, which was represented by Eugene Garanichev and Victoria Slivko. Both in the sprint the day before showed excellent results: Victoria took gold, and Eugene was fifth. In the singles mix, the duo seriously claimed a medal, but in the last shoot Garanichev took three additional rounds. In total, the team had five misses: one for Victoria and four for Eugene. However, the Tyumen in the middle of the race were close to disqualification. Eugene almost missed the transfer of the baton, he had to pass back, because of which he almost fell. Fortunately, everything went well, and the baton was passed. 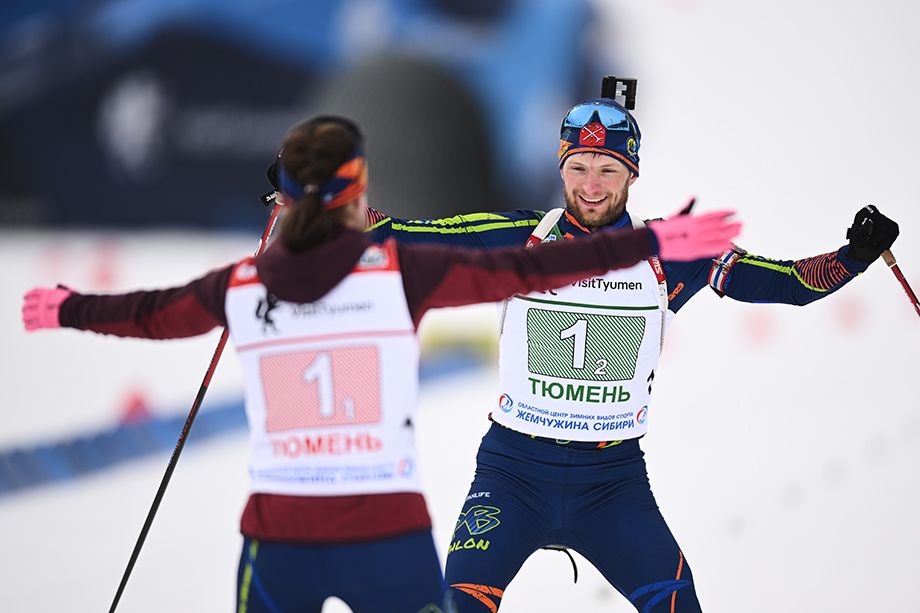 Garanichev shouted at me from afar, “Come on, speed up.” I started pushing, and he slipped past without hitting me. But we orientated, I have such experience from Europe. All is well, we passed in the transfer zone, hit each other. “ 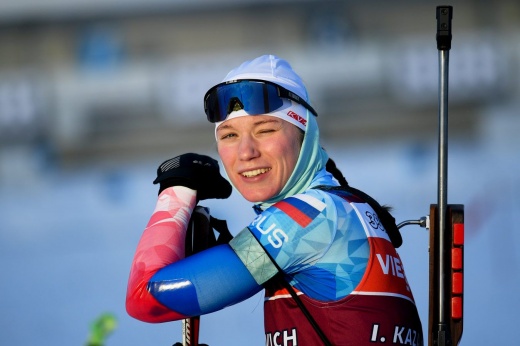 “The coach told me, ‘Everything, you’re not giving an interview!’ An open conversation with Irina Kazakevich

Kirill Bazhin and Tamara Derbusheva (Voronina) from Sverdlovsk also fought for the first line for a long time. The biathletes made only four misses, but obviously lost to more experienced athletes in speed. For both athletes, the bronze was a great result, because if Tamara ran in the IBU Cup, Bazhin exclusively in the Russian Cup.

Nevertheless, the main stars of the race were the representatives of the Sakhalin region Anastasia and Yuri Batmanov. Although they were filmed as a roundabout, they were definitely remembered by the audience, because for the first time in the history of Russian competitions, a father and daughter ran one race. According to the Batmans, initially this was supposed to be a thing that only relatives had to watch, but both fans and the media learned about the story.

Kristina Reztsova really managed to stun the audience. The biathlete, upset that she was not allowed to run the Russian cross-country skiing championship, took part in two mixed relays. Such cases, of course, are not uncommon, just before the Olympics Timofey Lapshin and Ekaterina Avvakumova at the World Cup for the Korean national team ran for a day and singles mixed and mixed relay. However, this venture did not end well.

But things went differently for Christina. In a single “mixed race”, the athlete ran with Petro Pashchenko. The weak link, so to speak, was Reztsova. Let the speed of the biathlete was great, there were problems with shooting. At the first stand, Kristina went in a circle, due to which the Khanty-Mansi Autonomous Okrug-Ugra team was thrown back. In her second stage, Reztsova made three more misses. Meanwhile, Pashchenko took only two additional cartridges for both stages. As a result – fourth place.

Christina Reztsova told what she did in the breaks between relays

In the mixed relay, Christine was lucky. Reztsova ran the first stage for Ugra. Once again, the shooting of the athlete was lame, she took three extra rounds. But thanks to the brilliant speed and mistakes of rivals, she passed the baton to the first position, bringing Udmurtia, going second, 17.8 seconds. As a result, the Ugra team took fourth place, although it took bronze at the Russian level due to the victory of the Belarusians.

“I was asked what kind of relay I wanted to run. I said both. It seems that at first everything was a joke, and then they say: “Do you want to? Run! ” I thought, “Why not try?” There was always a desire to run two races in one day, to see how hard it would be. I thought it would be harder, but the good thing was to distribute the forces on all three laps, and the finish worked. I am especially happy with the second race, ”admitted Christina. 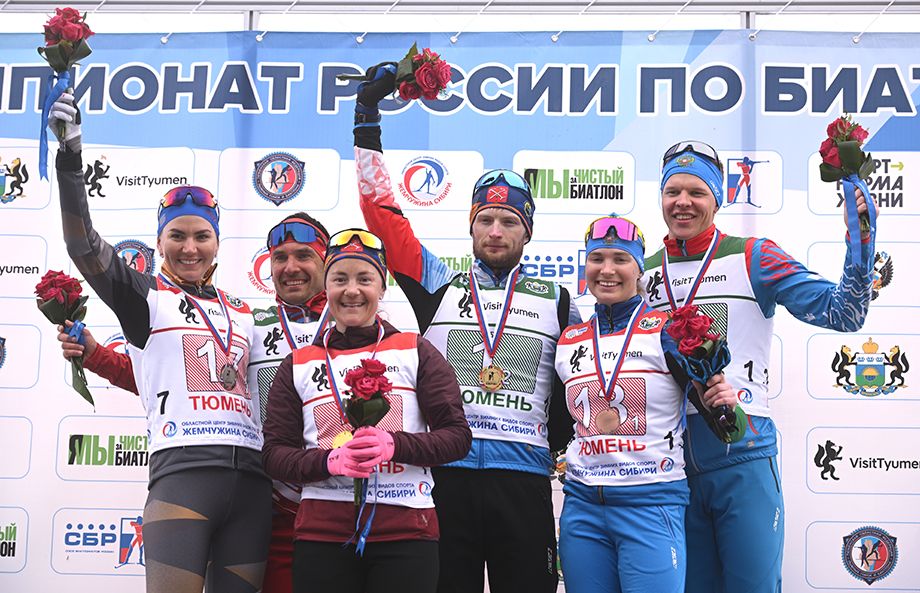 In the mixed relay, the Belarusians became the winners again. The team was the favorite before the start of the race due to its strong lineup (Irina Leshchenko, Anna Sola, Dmitry Lazovsky and Nikita Lobastov), ​​but in the first stage Leshchenko entered the circle on the stand. After that, the Belarusian team was thrown far back and was a minute behind. But Sola pulled up the team. Lazovsky almost nullified all Anna’s efforts, balancing on the edge of a circle on the bed, but it worked out. Already at the last stage Lobastov brought the team to the first place thanks to excellent shooting and mistakes of rivals.

“How did you manage to win 42 seconds per stage? First, clean and fast shooting. Secondly, the guys with whom we caught up with the leader, went fast enough, tried to get. That’s what happened, “Lobastov explained. 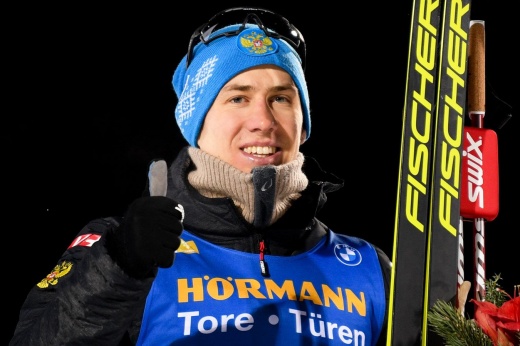 Russian biathletes spent the best season in five years. Despite being expelled from the World Cup

The third was slightly unexpectedly the representatives of the Moscow region, although the team showed perfect shooting, taking only two dops. After the first stage of Ekaterina Noskova, the team was in the top five, but lost almost a minute. Anastasia Goreeva managed to get into the top three, boldly dealing with the stage with Solo. Mikhail Pervushin, for the first time this season, made “zero”, brought the Moscow team to second place. Kirill Streltsov, alas, slightly increased his position, but managed to keep the medal.

Anastasia Goreeva about the third place in the sprint: it turns out, she opened the door to the mass start

Eduard Latypov, who did not plan to run the relay due to ill health, helped the Bashkir team to close the top 5 races. The leader of the Russian national team made “zero” at his stage and played more than a minute behind.