The classic mixed relay at the Russian Championships is such an important event for the regions and their athletes that some biathletes simply could not refuse to participate, despite the imperfect condition.

Latypov, who referred in a sprint to ill health due to illness, was still declared for Bashkortostan. And Reztsova, blazing with energy, ran the second relay in two hours.

High competition aroused great interest in this race and kept the tension during all stages, and the amazing outcome gave the victory to the team of Belarus.

The rivalry of the best Russian biathletes in the relay race is a rare spectacle. In Tyumen, we could have the opportunity not only to watch this fight, but also to expect an amazing finish, as Loginov, Latypov, Serokhvostov and a strong Belarusian athlete Lobastov were declared for the fourth stage in their teams.

Of the 15 teams that started, biathletes from the neighboring country (Leshchenko, Sola, Lazovsky, Lobastov), ​​Bashkortostan, where Babikov and Latypov ran in the men’s stages, and Khanty-Mansi Autonomous Okrug-Yugra with Reztsova and vice-champion of the sprint Kapli. 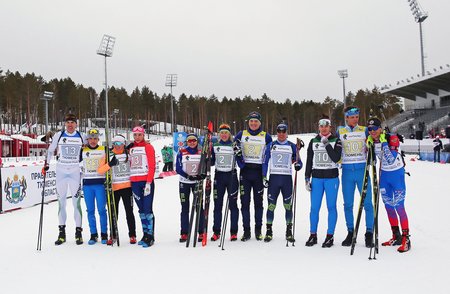 To my great disappointment, Kazakevich and Mironov could not take part in the race, as the Sverdlovsk region did not find a full set of men for the mixed relay. Sad news.

At the first stage, Reztsova showed that she does not know fatigue. Although she worked as an Olympic medalist with additional ammunition, after the second shot she made a small gap from the three pursuers: Kulakova, Nigmatullina and Noskova.

The incident happened to Irina Leshchenko from Belarus. The 2018 Olympic champion entered the penalty area and significantly complicated her team’s plans to fight for medals. Maria Dubrovskaya from the Bashkir team also had a disastrous stage and almost deprived Babikov and Latypov of hope for the podium.

In the second stage, 26-year-old Kaplina continued Reztsova’s case and increased her lead due to her excellent work at the border. The Khanty-Mansi Autonomous Okrug team confirmed the strength of its female half, but then Burundukov and Suchilov had to fight with very high-status athletes. In addition, Anna Sola from Belarus pulled the team to third place with a lag of just over 40 seconds

In the third stage, Burundukov made nervous, making three mistakes on the second line, but showed steel nerves and kept the first position. The team of the Moscow region broke into the second line due to the efforts of Mikhail Pervushin. Belarus and the second team of Khanty-Mansi Autonomous Okrug-Yugra fought for third place. Loginov, Latypov and Serokhvostov were not even close.

In the final stage, the leaders ran Semyon Suchilov, who was in the sprint in the top 6 in speed. In contrast to his physical condition, Suchilov could not boast of the accuracy of his shooting and ran to the penalty area on the first line, while Streltsov was the first to leave. Porshnev and Lobastov, who were pursuing him, fired quickly and accurately, and together with Suchilov set off in pursuit. The chance for the podium came even for Latypov, who closed the top five.

On the penultimate lap, the less fast Streltsov was overtaken by three pursuers. Lobastov worked phenomenally and made a small gap, which was enough to win. Porshnev and Streltsov won silver and bronze. Suchilov missed the podium, but formally became a bronze medalist of the Russian championship together with the team.

We did not wait for the final outcome with the participation of biathletes of the Russian national team.