The first Grand Prix in Jeddah took place just three and a half months ago, in December 2021. Much has changed in the world and in Formula One since then. The December weekend on the new track was received with delight and a sense of balancing on the verge, the March weekend in 2022 also turned out to be unusual.

It all started on Friday, when after an unexpected turn on the curb in the 10th turn, Turkish newcomer to Formula 2 Cem Bolukbashi hit the car hard, landed in hospital with a concussion – and no longer took part in the stage.

At the end of the first Formula 1 training session, the Yemeni Hussites launched a rocket attack on the Aramco oil depot, located near the track. A strong fire broke out, followed by long negotiations over whether to race in such conditions.

The organizers convinced the teams by providing security guarantees. Five riders – Lewis Hamilton, George Russell, Fernando Alonso, Pierre Gasley and Lance Stroll did not want to perform in such conditions, but convinced them. 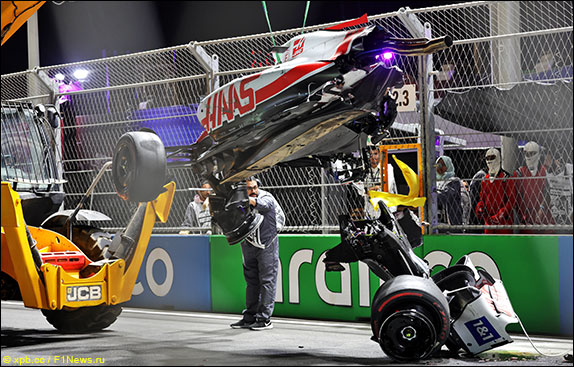 In the qualification on the same curb in the 10th turn, Mick Schumacher got into a serious accident. At a speed of 260 km / h, the car turned around and instantly threw into the concrete wall, from which it flew away, hitting the wall opposite. According to the team, the overload reached 33g. Mick was not injured, but did not take part in Sunday’s race. 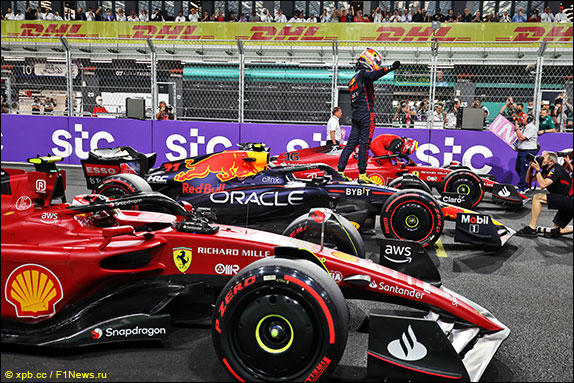 The sports intrigue turned out to be interesting. On Friday and Saturday, the winner of the last stage, Charles Leclerc, was in the lead in training, but Sergio Perez showed the best time in qualifying, winning the first pole of his career in his 215th Grand Prix.

Equally unexpected was the result of Hamilton – the British car frankly did not go and he – for the first time in Brazil’17 – dropped out in the first session.

Moreover, the five slowest cars in the qualifying round (of those that passed the circle) were with Mercedes power plants. Only George Russell managed to break into the top ten. The new regulation was considered by many to be evolutionary, but there is a feeling that it has revolutionized.

According to the stewards, Daniel Riccardo lost three positions on the starting field, for blocking Esteban Ocon in qualifying.

Before the start, Ferrari mechanics worked with Carlos Science’s car, replacing part of the wiring under the control of an FIA representative, but finished everything on time.

Yuki Tsunoda’s car again had problems with the fuel system on Saturday, he could not pass the fast lap in qualifying and was allowed to start by the stewards. But leaving for the formation circle. his AlphaTauri stopped on the track again due to transmission problems – the car had to be evacuated, he did not start the race.

Pirelli has chosen the same lineups as in 2021 – C2, C3 and C4 as Hard, Medium and Soft. The softest composition was granulated and quickly worn out, but under the new regulations the teams have the freedom to choose the tires for the race distance. Magnussen, Hamilton and Hulkenberg on Hard, the rest chose Medium for the first leg.

The first row of the starting field was occupied by Perez and Leclerc, the second by Science and Ferstappen, and the third by Okon and Russell. 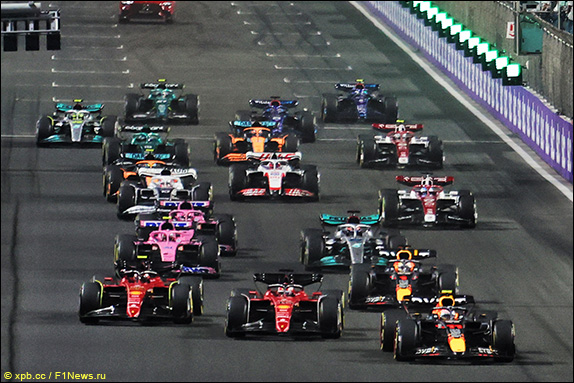 At the start, Perez retained the lead, Ferstappen ahead of Science, rising to third place. Hamilton was ahead of Elbon, Magnussen and Norris – Gasley. Zhou rolled back to last place after contact with Riccardo.

In the 4th lap, Russell was ahead of Okon in the fight for fifth place. 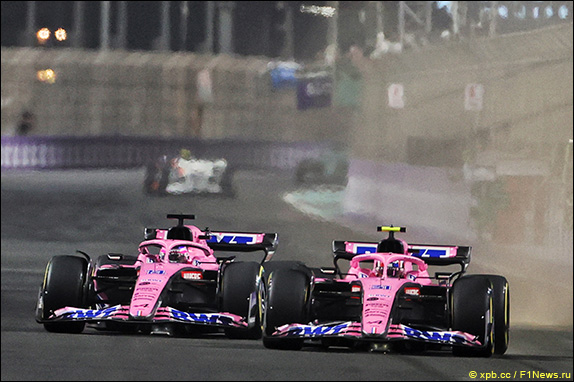 Alonso pressed Okona for several laps and advanced on the 7th lap. In the 8th lap, Esteban overtook Fernando, but went off the track and regained position. Bottas and Magnussen caught up with them from behind – and the fight continued for four.

On the 9th lap Riccardo changed the tires.

Hamilton was ahead of Stroll and then Norris, rising to 11th place.

In the 13th lap, Zhou and Hulkenberg were ahead of Stroll.

Stewards punished Zhou with a five-second fine – in the fight he went off the track and did not return to position.

Alpine asked the riders to refrain from fighting – and Bottas was immediately ahead of Okon.

On lap 14, Stroll and Elbon changed tires. Hamilton was ahead of Gasley.

On the 15th lap Perez held a pit stop, returning to the track in the fifth, on the 16th Gasley changed the tires – they were unlucky with the choice of the moment of the pit stop.

On the 16th lap, a safety car drove out – Latifi crashed into a car on the way out of the last turn. Those who went to Medium changed the tires, switching to Hard.

Magnussen, Hamilton and Hulkenberg remained on the track – all three went to Hard in the top ten and chose to keep the position.

Leaving after the pit stop, Science was ahead on the safety car line, but Perez drove past him – the stewards dealt with the incident.

Leclerc returned to the track as the leader of the race. 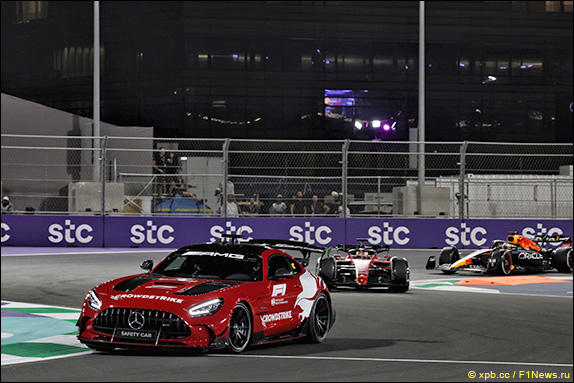 A restart was announced on the 20th lap. Lecler retained the lead. At the request of the team, Perez missed Science and regained his position.

In the 24th lap, Hamilton overtook Magnussen, but Kevin regained his position – and the fight continued. Bottas was ahead of Hulkenberg in the fight for ninth place.

In the 25th lap, Hamilton overtook Magnussen in the fight for sixth place, and Okon and Riccardo – Hulkenberg.

While serving a fine at the pit stop, Zhou stood for less than five seconds, received a fine for driving on the pit lane – and served it on lap 28.

In the 35th lap, Alonso was ahead of Magnussen in the fight for seventh place.

Leclerc and Ferstappen exchanged the best laps, but Charles maintained a gap of one and a half seconds, not allowing the opponent to use the DRS.

On the 36th lap Bottas changed the tires.

The power plant in Alonso’s car lost power, he tried to return to the pits, but stopped on the track. 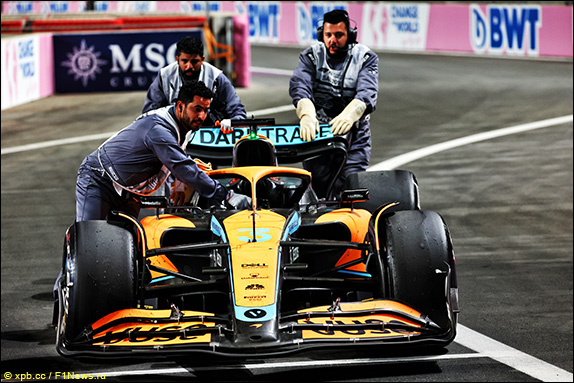 On the 37th lap, Daniel Riccardo stopped on the track due to car problems. Bottas turned onto the pit lane again – and also got off the track.

The race management has announced a virtual car safety mode. Magnussen and Hulkenberg managed to change the tires before the pit lane closed due to the stopped cars of Riccardo and Alonso. Hamilton didn’t have time – the engineer called him to the pits when Lewis had already passed the entrance.

A restart was announced on the 41st lap. Hamilton changed the tires – and returned to the 12th track.

Magnussen was ahead of Elbon in the fight for tenth place.

Ferstappen reduced the gap with Leclerc and took the lead on the 42nd lap, but Charles regained his position on the straight.

On lap 43, Max repeated the attack, but blocked the tires and stayed behind and took a break to cool the brakes.

In the 44th lap, Magnussen overtook Stroll, and Hamilton overtook Elbon, and then Stroll.

On lap 47, Ferstappen attacked again – ahead of Leclerc, leading the race. Charles responded with the best lap, but the difference in speed was not enough to win back – and yellow flags appeared – on the 49th lap Elbon stopped the car on the track after a collision with Stroll.

Under the yellow flags, Science, Perez and Magnussen did not slow down enough – the stewards will deal with these incidents.

Max Ferstappen won the Saudi Grand Prix, winning for the first time this season and his 21st of his career. Charles Leclerc finished second, half a second behind. Carlos Science climbed the third step of the podium.

In two weeks, the season will continue with a race on the updated track in Melbourne. Time will fly fast.