Magnus Carlsen asked Western politicians an awkward question. As if now he himself was not “canceled”.

When Western authorities opened sanctions fire on Russia, the sports community largely supported the decision. Our athletes were first deprived of national symbols, and then were excluded from international tournaments. Norway has shown a special passion for wrestling with Russian athletes.

It is all the more surprising that the world’s best chess player Magnus Carlsen stayed away from the rampant Russophobia. The Norwegian seemed to have to unequivocally support the disqualification of Sergei Karyakin, but instead asked Europe a very awkward question.

The profoundness of the Norwegian genius and his unwillingness to slide into the binary system of evaluation in the current circumstances seems surprisingly fearless. As if he had not been “canceled” for it only now.

The decision to disqualify Sergei Karyakin in FIDE was made on March 21. The International Chess Federation has suspended the Russian grandmaster from the competition under its auspices for six months. The reason is the political position of the Russian, which he publicly stated a month before.

Sergei detailed his point of view on social networks, supporting the Russian authorities, after which he drew the attention of the FIDE Ethics Committee. And if before that the chess organization was not going to exclude Russians, limiting itself to banning Russian national symbols, then in this case it took extreme measures.

FIDE’s move ultimately surprised few, including Karyakin himself, who continued to insist on his position and even offered to create an alternative chess union. But the reaction of the best chess player in the world, who had to unconditionally support the international federation, struck even the Russian grandmaster.

– Support came from nowhere, – Sergei wrote in his telegram channel.

In a recent interview, Magnus Carlsen was asked about Karyakin’s disqualification, but instead of a capacious and banal answer, the journalists received an unexpected monologue.

– Of course, I do not agree with Karyakin at all, but is it right to exclude people for an opinion that we do not tolerate? I’m not sure. It is possible that such a position pays off in difficult times, but we are also setting a precedent, – Carlsen told VG.no.

The Norwegian chess player did not side with Russia, but questioned the effectiveness of today’s sanctions. According to Carlsen, the “sanctions tyranny” creates the image of a “holy martyr” around Karyakin, which our grandmaster dreams of acquiring. And the West “willingly helps” him in this. 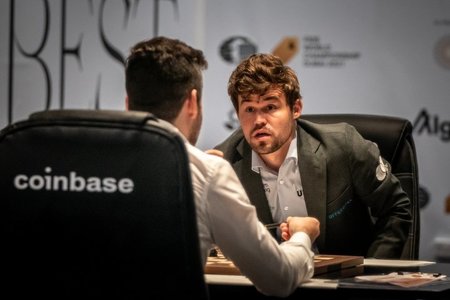 – In general, is it good that we give him exactly what he wants? In fact, Karyakin has always been consistent in his political stance. It’s so human: when you have an unpopular opinion and it meets the resistance of society, you start to defend it even more diligently, – says Magnus.

One can disagree with some of Carlsen’s thoughts, but his remark about freedom of speech is certainly accurate and profound. Persecution of athletes because of their opinion is a short-sighted policy and, more importantly, fundamentally contrary to the democratic principles of European society, one of which was voiced by Voltaire. And later – turned his biographer into a famous aphorism.

– I do not agree with any word you say, but I am ready to die for your right to say it.

The main thing is that Magnus himself is not “canceled” for such statements.