Loginov and Latypov could not bring their teams to the podium.

Tyumen hosted the last race of the Russian championship, which ended the biathlon season in our country. The hosts, who included athletes from the national team, were among the favorites before the start, but it did not help them. The relay race for the representatives of the Tyumen region ended in failure – only the sixth line. The team of Bashkortostan performed even worse with Babikov and Latypov. Amazing finish of the season, where everything turned upside down.

A chance for backups

The broadcast of the men’s mass start in biathlon partially coincided in time in the ski marathon, where Alexander Bolshunov won another victory on the Syktyvkar track in a hard fight. The choice for sports fans was really not an easy one, because many recent heroes of the Olympic Games also fought in biathlon competitions. However, now Alexander Loginov, Eduard Latypov, Karim Khalili represented different teams. The strongest Belarusian athletes competed with them, who still played for the united national team. Intrigue in biathlon was predicted much more, which was eventually confirmed by the course of the race.

The Tyumen region, which set up three relay teams at once, could count on at least one medal. By the end of the first stage of the race on the top line really boasted the host region, without a single miss to pass the baton Igor Shetko came up. But it was about backups, the second team of the region. The first was noticeably behind the leaders. However, it was premature to draw far-reaching conclusions. Athletes who took the baton had a chance to rectify the situation.

In the second stage, the bronze medalist of the Sochi Olympics Evgeny Garanichev ran away from the Tyumen-1 team. Bashkortostan threw into battle world champion Anton Babikov. Vice-champion of Europe Peter Pashchenko started as a member of the team of the Khanty-Mansi Autonomous Okrug. World Cup winner Alexander Povarnitsyn this time performed under the flag of Udmurtia.

Not surprisingly, in the fight against such stellar rivals, the second team of the Tyumen region could not maintain the lead. Already following the shooting from a lying position, the representative of Tyumen-2 Andrei Vyukhin missed the competitors ahead, losing to Semyon Suchilova from Khanty-Mansi Autonomous Okrug-2 43 seconds.

The two-time Universiade champion was the first to finish shooting from a standing position, although the athlete had to use two additional rounds. The biathlete of Khanty-Mansi Autonomous Okrug worked well with his feet and passed the baton first, Povarnitsyn and Pashchenko were 29 seconds behind him. Babikov and Garanichev could not perform a miracle, the leader broke away from the representatives of Bashkortostan and the Tyumen region for more than a minute.

The main star of the third stage, perhaps, was the bronze medalist of Beijing Karim Khalili, representing the Central Federal District at the Tyumen competitions. But the 23-year-old athlete started his stage with a lag of one minute and 10 seconds, and therefore to become the hero of the race with such initial data was not easy. 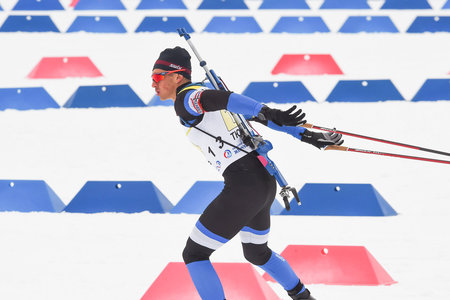 Following the results of the next line of fire, the leadership of the two teams of Khanty-Mansi Autonomous Okrug remained, followed by representatives of Belarus and Udmurtia. By the end of the stage, the Khanty-Mansiysk tandem was still in the lead, but there was no need to talk about a significant gap. Khalili played almost a minute behind, showing the fastest move, and finished his leg of the relay third. 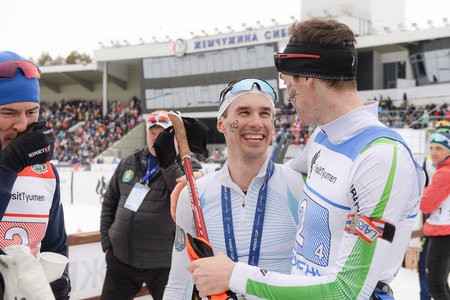 Belarusian Nikita Lobastov started with a lag of 36 seconds, but the native of Udmurtia performs brilliantly on Russian tracks, so it would be strange to write him off. Also at the start of the final stage were the winners of Beijing 2022 Alexander Loginov and Eduard Latypov, but there was a solid lag behind the athletes from the Tyumen region and Bashkortostan could only hope for a miracle.

After his first line of fire, Porshnev became the leader, who did not concede the first line to anyone until the finish, shooting perfectly in the stand. Nikita’s main pursuer was his namesake Lobastov. He may not have shot in the best way, but on the track he acted beyond praise. It was the Belarusian who finished the race second.

Kirill Streltsov, an athlete from the Central Federal District, closed the top three, and Filimonov reached his final finish in fifth place, beating the biathlete from Udmurtia. As for the favorites of the entire Russian public Loginov and Latypov, our collections were not very great, even if we talk only about their own stages. Alexander failed in the rack – used three extra rounds and still landed on the penalty area. Eduard could not take advantage of the failure of his partner in the Russian national team – Loginov came to the finish line sixth, Latypov lagged behind him by about a minute.