Elena Lashmanova has already served a two-year disqualification for doping, but now she is being removed again. What’s going on?

World and Olympic champion Elena Lashmanova was punished again for doping. This time, the 29-year-old athlete will not only be left without starts, but will also receive gold medals, which were won ten years ago.

The belated finding of doping fighters makes you wonder if the fact of the violation surfaced just now?

Or is our athlete just being mocked?

The champion of the Olympic Games in London in athletic walking Elena Lashmanova received another disqualification – this was reported by the Independent Organization against Doping in Athletics (AIU). The new two-year suspension expires on March 9, 2021. In addition, the Russian will be deprived of the awards won in the period from February 18, 2012 to January 3, 2014. During this period, the athlete won the Olympics and the World Championships. Both awards were won in the 20 km walk.

We will remind that Lashmanova already served disqualification in the period from February 26, 2014 to February 25, 2016. But then the Russian woman was punished for the presence of banned substances in a sample taken on January 4, 2014. That is, the punishment followed in less than two months. Now the AIU is dismissing Elena for violating anti-doping rules 10 years ago. For the whole previous decade, for some reason, the rehearsals of the world champion and the Olympics did not arouse any suspicion.

Interestingly, even the high-profile doping scandal surrounding Russian athletics did not persuade anyone to study Lashmanova’s tests closely at a time when she had no equal in her discipline. But then many pupils of the lifelong disqualified coach Viktor Chogin fell under the hot hand. Sergei Kirdyapkin was left without the gold of the London Olympics, Olga Kaniskina was deprived of the silver medal of the 2012 Games, Vladimir Kanaykin was deprived of the bronze medal of the World Cup.

However, it is possible to try to understand such a belated reaction on the part of anti-doping fighters. The AIU report notes that the decision to disqualify was made on the basis of data from the Moscow Anti-Doping Laboratory. Recall that the World Anti-Doping Agency received access to information only in January 2019.

Thus, we can assume that all this time anti-doping structures carefully compared all the facts and finally found a violation of Lashmanova. It is only slightly embarrassing that this was reported right now, at a time when almost no sports or sports organization is ashamed to attack Russia. Such is the timely coincidence.

Lashmanova’s sudden violation also coincided with the period when the All-Russian Athletics Federation is trying to resolve the issue with World Athletics about the participation of our athletes in international competitions.

Note that since 2015, our athletes could go to the start only in neutral status, in March 2022, Russian athletes lost their place in continental and world tournaments under any banner. 44 of our 55 athletes, previously admitted to international tournaments, demand decisive action from the WFLA and the Russian Ministry of Sports. The country’s strongest athletes are calling for a pause in the recovery process in world athletics if the admission situation does not change in the near future. In this case, the contributions to the World Athletics budget will be terminated. 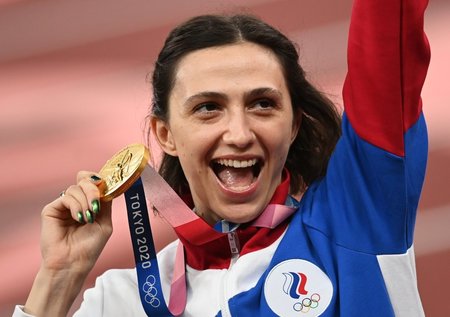 It is not a fact that possible ultimatums to the world leadership in athletics are connected with the promulgation of Lashmanova’s violations. All the more formally, the AIU is independent of the World Athletics Association. However, the sudden rise of punishment for such a long-standing crime, in the existence of which the responsible organizations have to take their word for it, suggests that our negotiating positions are not so strong now.

We can threaten the leaders of world athletics with decisive measures, but who knows what we can get in return? Will doping be found in Olympic champions in Sydney, Barcelona or Moscow? The case of Elena Lashmanova proves that no time frame will prevent the need to find “banned substances or methods.” Therefore, the deprivation of medals in ten years should probably not surprise anyone. And this is done by an organization created only in 2017.

However, we should remember a curious precedent for the future. Russophobia in sports can last a long time, but not indefinitely. If anti-doping structures are emerging now to find a reason to punish long-standing violations, why can’t there be any anti-corruption structures in the future that find something wrong with the actions of existing sports organizations? And if nowadays it is possible to take away medals from Russian athletes, then by the same logic it will be possible to punish for old offenses of representatives of other countries who now enjoy each blow to Russian sports. The boomerang effect was not canceled.