Rangers’ Alexander Georgiev was incredibly good in a match against one of the NHL leaders.

Alexander Georgiev reflected 44 shots in the meeting with “Carolina”. The second number of “Rangers” did everything to stay in the team on the flag of the transfer window: issued a shutout, and despite the fact that the match was held away, the stands chanted his name.

“Bet against Rangers, if at the gates of St. George”

The Rangers goalkeeper team seemed bulletproof at the beginning of the season: Igor Shesterkin, the first number extended for at least another three seasons, and Alexander Georgiev, no less reliable, who went on the ice much less often than his partner.

But in 2022, the better Shesterkin played, the worse things turned out for his opponent: either Georgiev lost confidence due to lack of playing practice, or he began to be annoyed by the success of a teammate. From January to mid-March, he recorded only two victories, finally losing the faith of the fans. It came to the point that they offered to bet on the Rangers, when Georgiev was announced for the match. If such conversations reached the Russian, they could not please him.

With the start of the transfer season, he began to be actively courted in other teams, such as Toronto, where Georgiev could become the main goalkeeper. At Rangers, he does not foresee such an opportunity in the near future.

On the ice “Carolina” and Georgiev

Despite the general minor atmosphere around Georgiev, no one canceled his main job – due to the busy calendar in connection with the December outbreak of Kovid in the league, he continued to regularly replace Shesterkin. And last night he went out on the ice in a meeting with “Carolina”, the third team in the league.

Two days before the Rangers arrived, the Hurricanes lost to Washington at home, playing a rather sluggish match. Therefore, they started the meeting with the guests from New York much more actively, breaking a real hail of throws in the first period.

The Rangers looked unarmed and struggled to reach the opponent’s goal. But Georgiev had to work hard to make 12 saves in the first 14 minutes of the meeting. As a result, he became the key to the success of “Rangers”, who managed to push the first puck into the gates of “Carolina” in the second period. But it did not make it easier for Georgiev – the “hurricanes” flew back, continuing the attacks. Sometimes it seemed that there was only one team on the field, and from the second – only the goalkeeper. In the third period, the stands of the arena in Raleigh, which were surprisingly full of Rangers fans, delayed the name of the Russian goalkeeper, encouraging him to the feat.

During the match, Georgiev managed to deflect 44 shots – this is his best result of the season and, according to many, the best match in his life. “I did not see one team beat the other so the whole match, and still lost. This is Georgiev’s game, “one of the Rangers fans wrote on social media. “This match will be remembered as a match named after Georgiev,” suggested another. “Shesterkin changed into Georgiev?” – Another fan joked. 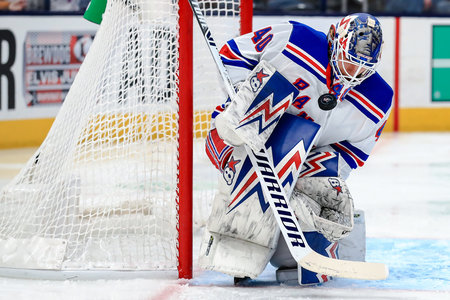 This was the Russian’s first shutout of the season, which he modestly called the merit of the whole team. He was logically recognized as the best player of the match, and fans began to apologize en masse on social media for the lack of faith in the goalkeeper. And at the same time – to ask the club’s management not to sell such a valuable asset.

If Georgiev still leaves the Rangers (he has only a day left for that), he did everything to make the team really sorry for his loss.