Rene Fazel has been the head of the International Federation for 27 years, and now his feet are being wiped.

When foreign officials removed our hockey players from the World Cup, they hoped not only to punish the Russians, but also to set up a sports community against them. However, ordinary fans have not yet reacted to the omission of the tournament “Red Car”. Fans are preoccupied with feelings for their national teams, not empty malice.

It seems that officials do not like this development at all. And so they decided to continue their Russophobic actions, choosing a new target. And from their own ranks!

This time it was Rene Fasel himself. What did the former president of the International Hockey Federation suffer from?

“Kindly said behind the scenes”

When the Helsinki and Tampere cities were selected for the 2022 World Cup at the IIHF Congress on May 19, 2017, the president of the organization, Rene Fasel, had no idea how this decision would come to him in five years, when he will leave the honorary post.

On the eve of Finland’s tough match against Latvia, Matti Nurminenou, who will take over as IIHF Secretary General in the summer, was asked about Fazel’s visit to Finland.

– Officially, he is the honorary chairman and received an invitation. I know that behind the scenes he was kindly told that perhaps he should think seriously about his arrival.

At first glance, Nurminen made an incorrect statement, clearly tarnishing the honor of his colleague, moreover, more experienced and famous than the Finn himself, and in the organization itself, this attack had to be assessed strictly. However, Matti enjoys the full support of IIHF head Luke Tardif, who considers the Finn an unsurpassed professional in his field. This means that you will not have to answer for the words.

Moreover, even the former Prime Minister of Finland Alexander Stubb made similar statements. Back in March, the politician said that Fasel should no longer have anything to do with the World Cup in Finland.

Too close to Russia

Why does the honored manager, who has been at the helm of the International Federation for 27 years, get so much? The answer is simple: Fasel maintains business relations with Russia.

In September 2021, at the semi-annual IIHF Congress in St. Petersburg, our managers offered the liberated Swiss a working relationship with the KHL and received a positive response. 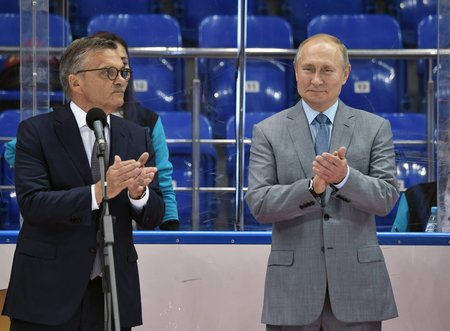 Apparently, the international organization thought that in the spring Fasel would change his mind, but the Swiss proved to be much more resilient than most foreign hockey officials, and continued to cooperate with the Russians.

This fact itself is already causing dissatisfaction among the Finns. According to the local Yle, any support for the KHL as a league closely associated with the Russian government should be condemned. From such statements, the eyes climb on his forehead. Probably, the veil of Russophobia overshadowed the remnants of common sense to the Finns.

Our neighbors believe that this working communication between Fasel and the KHL spoils the image of world hockey, but it seems that Nurminen and his colleagues are mistaken. If anyone is harming the sports community, it is discriminatory and unethical behavior by leaders like Matti.