Even if you don’t take part in the Dungeons & Dragons table party, it’s interesting to watch. If the master knows his business and is able to come up with an interesting story, and the participants have a rich imagination, success is guaranteed. That’s why Tiny Tina’s Assault on Dragon Keep to Borderlands 2, inspired by the advent, was so successful – the idea of ​​D&D was perfectly combined with the obsession for which the series is famous. With Tiny Tina’s Wonderlands, this idea was developed as a separate stand-alone game.

It is worth mentioning at once that, despite the absence of the word Borderlands in the title, it is largely a good old “board” – with grotesque characters, similar gameplay and characteristic humor. There are also “freaks” who shout loudly, there are also midgets and muscular men with wings – as before, there is almost no room for subtle humor, it should be funny at the same time when the next pearl is said or someone yells at you.

The locations turned out to be very colorful

In Borderlands 3, I personally quickly got tired of it – what worked well in the sequel, in the third part, seemed tense and flat. In Wonderlands, everything remains the same, but it looks fresh, because the jokes are somehow related to cash. All that happens is the fruit of the imagination of Baby Tina, who places the figures on the map and moves them as she pleases. The master of it is not the most outstanding: then she forgets to add the right cave, then instead of removing garbage from the map, it turns out that this is part of the game and come up with a quest related to it. But this is the appeal.

All the madness, unexpected appearances of characters and sudden changes in the environment do not require plot justifications – just the master so wanted, period. This completely frees the hands of developers, which is especially noticeable in side tasks, where there are different characters – From the arrogant model who wants to see her statues in different corners of the map, to the goblins who started the revolution. That’s why the degree of absurdity here is even higher than usual – and, perhaps, that’s why humor works a little better than the third part. 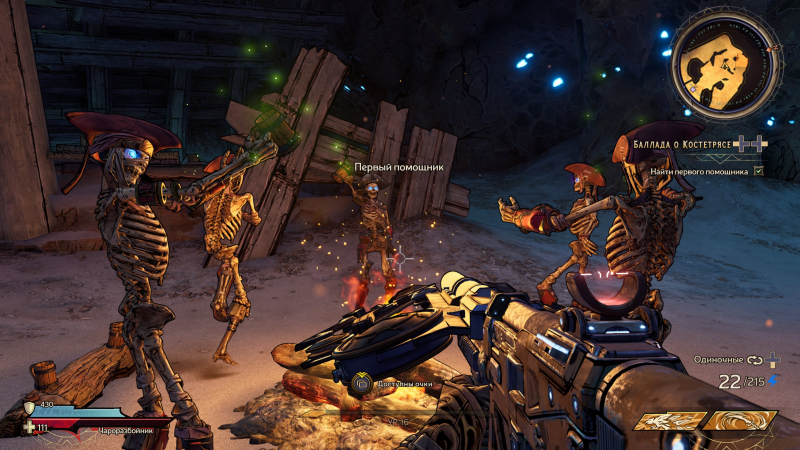 There is no need for stereotypes and banalities, but this already seems to be a “trick” of the series

Many familiar elements of the series have remained in place, but look and are called differently. Checkpoints – signs of fate, instead of shields – charms. Grenades are gone – now we use magic. We can encourage pets to suck out the vital energy of enemies or fly through them, causing harm. And we can throw enemies with poisonous or fiery shells. Like any outfit, spells are scattered around every corner, so change them like gloves, adding variety to the gameplay.

Another notable change is related to melee – now the inventory has a slot for a full-fledged melee weapon (before that in the series, recall, the whole “melee” was a simple blow on a separate hot key). Swords, hammers, axes – they all have different characteristics and give some bonuses. Tiny Tina’s Wonderlands has a lot of enemies who prefer to fight nearby, and with the addition of weapons, fighting them becomes more fun – you can quickly finish off a weakened enemy or just stun him, winning time. 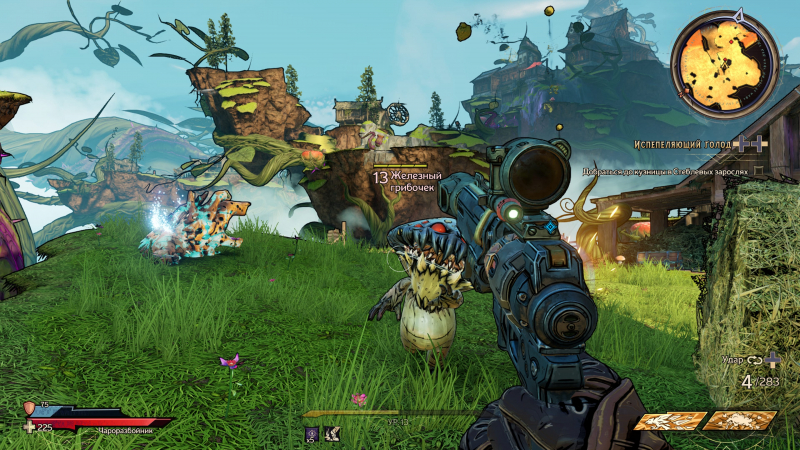 Enemies are very funny – the way these mushrooms irritate the player, never gets bored

And without class abilities did not do. No Tiny’s Wonderlands Vault seekers have been found, we are creating our own hero – like in a bayonet. First we determine the class, then choose a biography (affects the basic parameters), distribute points of strength, agility, endurance and other characteristics. The most important classes, of which there are six, and each has one passive skill and two active.

For example, a knife often causes critical damage, as well as causing the blade to spin in place, and can go into the shadows to attack unexpectedly – both abilities are very useful. And the arrowhead can use two spells, as well as turn almost any target into a lamb – and flies over the ground and can not respond to your attacks. It was these two classes that I combined when the game allowed me to do it at the twelfth level. Later I will be able to experiment with other classes – thanks to the stations “Perestroika”, which also returned from past games in the series. 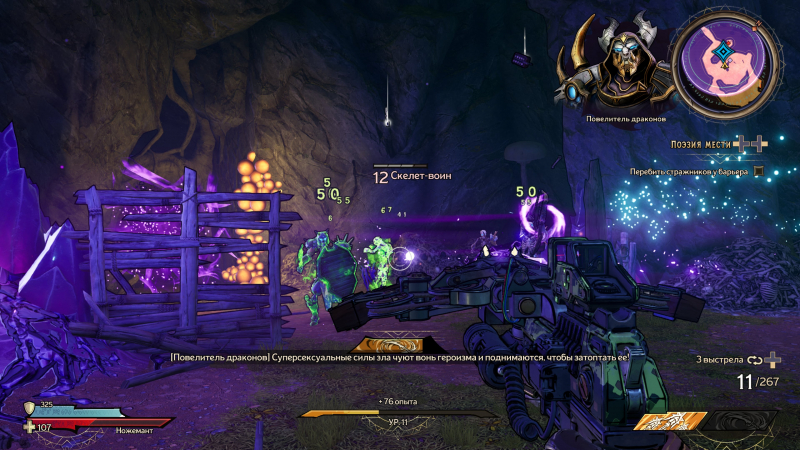 Subtitles make you look at this screenshot differently

The huge arsenal, which still consists of weapons generated on the fly, did not go anywhere. Pistols, submachine guns, shotguns, sniper rifles, even if two guns look the same, they shoot completely differently. Some bursts, some fire shells flying in an arc, some something like disks. Different shooting modes, different bonuses, different sights – the set of guns in the inventory is constantly updated, and at the same time changes the approach to the next shootout. Well, freezing goals is still fun – now these ice statues can be spectacularly smashed with a magnificent sword that seems to have come from a teenage fantasy.

However, later in this fun process, monotony becomes more and more apparent. The levels are structurally similar to what we saw in the numbered parts of the series: mostly a run from one marker to another, often interrupted by skirmishes. Clear the arena, protect the object from the crowd of enemies, the victory of the boss – all standard and tired of the third part. However, a little more attention was paid to the research – there are a lot of collectibles here, and it is interesting to look for hidden cubes with prizes. 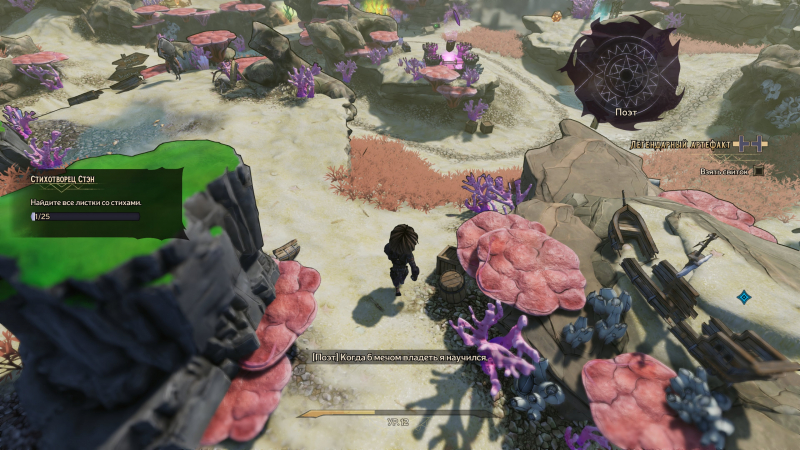 Many side tasks are performed directly on the world map

It turned out to be a good idea to add a map, with which the player gets new locations: with a view from above, we control our own character and walk through a maze consisting of paths, caves, quests of heroes and so on. This card is a paradise for fans of “collectors”. Here are the dice that give bonuses, and the restoration of altars by finding fragments, and hidden chests of gold. It seems like a strange solution to add random fights (just like in Pokemon games, when you walk in the tall grass and you can be attacked by the enemy at any moment) – if you fight, you are transferred to a boring arena and must win everyone. There is little experience for such fights, there is also enough equipment without them – fortunately, these random events are easy to avoid.

But for those who do not have time to get bored of shooting by the end of the storyline, there is great news – the endgame in Tiny Tina’s Wonderlands is one of the best in the series. Here, the concept of chaos levels has been introduced, which affects the complexity of battles in procedurally generated arenas. With the increase in the health of enemies, the chance of losing better things increases, and even steeper equipment begins to appear only on the twentieth – the highest level of difficulty. It’s more fun than what Borderlands 3 offered, but it’s not entirely clear why New Game + was not added at the start – it would be an alternative for those who want to have fun re-running the campaign for an already pumped-up hero. 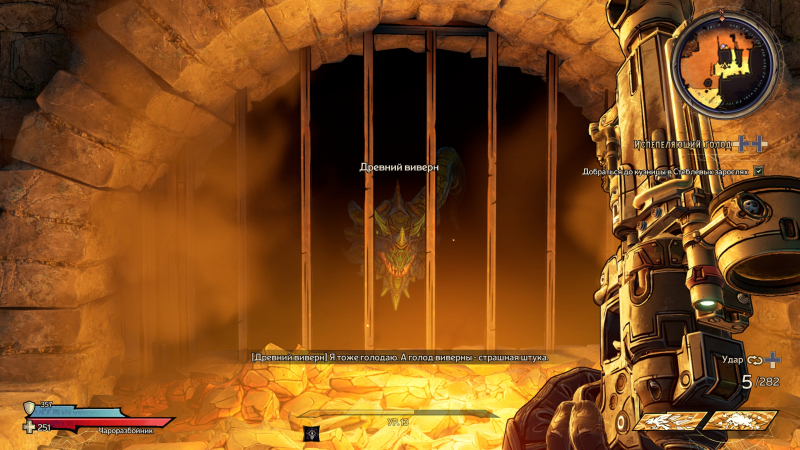 He didn’t scare me, and I shouldn’t fight with them

Borderlands 3 seemed like a forced release, released simply because fans demanded such a part. Tiny Tina’s Wonderlands looks like a project that the developers themselves were much more interested in creating. It is clear that the team had a lot of creative freedom, so he was able to implement some fresh ideas that made the gameplay more exciting. This applies to research, and shooting, and endgame. level Borderlands 2 again failed to reach, but the game does not get much worse – this time at least DLC want to wait.

Learn more about the grading system