I’m waiting for anything from Saturday’s derby, but not great football. Cheerful, spectacular – maybe, but not cool. The form of both teams lately does not give any reason to count on him. Lack of playing practice due to the break for the national teams – all the more so.

“Locomotive” after the winter break and the escape of Marcus Gisdol is cheerful in attack and a nightmare in defense. Replacing Murilo with Mampassi may turn out to be something interesting in the future, but so far, hole after hole is at the heart of the railway defense, mistake after mistake. Let’s not forget about Pablo’s departure to Flamengo. There is no question of game balance, there is only one way to win – to score more than to miss. And this, I must admit, periodically happens – as with “Khimki” or “Akhmat”, when the two goals of rivals “Loko” responded with three of his own. Victories in both of these meetings brought the club from Cherkizov newcomers – Kukhta and Isidore. The Frenchman has 3 + 1 in three matches, the Czech – 2 + 1. This, of course, is still far from the phenomenal performance of the Turkish soldier Yazyca, who in four meetings managed to overtake the best red and blue sniper Zabolotny and score six goals, but still the results are more than worthy.

Delivery of the ball to them is primarily through Zhemaletdinov – the third today in the RPL on a “goal plus pass” with 12 points (6 + 6) after Dzyuba and Agalarov. Only Rifat will miss the game with Spartak because of the number of cards. It is unclear who will replace him more or less equally. Zhemaletdinov’s absence is a great gift for Spartak.

However, it is not a fact that Paolo Vanoli will be able to take advantage of this. So far, the Italian’s work raises more questions than answers. More can be squeezed out of such a selection of players, but so far only the match with Dynamo can be brought to the new coach in an unconditional positive. And it is wrong to look for any reasons other than gaming. 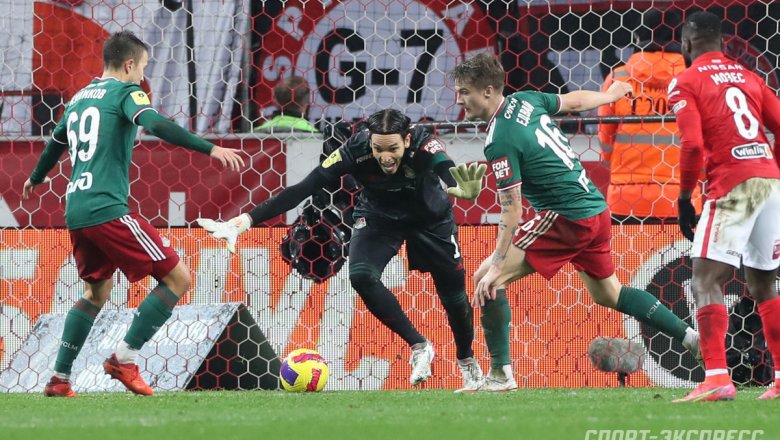 In recent weeks, there has been a lot of Zarema in the public space, which, of course, is always interesting, bright – one “red card the color of hellfire” is worth it – and readable, but, in my opinion, not always constructive. Basically, the wife of the owner of the red and whites pedals the topic of refereeing. “Spartak played well in Europe, because Ivanov and Meshkov are not judged there,” was the title of her recent column in the SE. The referees’ mistakes against Spartak lately, of course, have been. In general, they are always there – sometimes in one direction, sometimes in another. But to make a whole story out of one doubtful (not even incorrect, judging by the discrepancies in the ESC estimates, namely doubtful!) Interpretation of Gotsuk’s foul and in fact to explain Nizhny Novgorod’s non-victory in it, in my opinion, is strange. Not to mention the home defeat of “Krasnodar” without nine legionnaires, who got to Moscow on the transfer and did not train the day before the game.

“Spartak” with its budget and ambitions takes one point in two matches with a newcomer to the Premier League, with a modest lineup! There can be no excuse for this. Yes, Promes did not score a penalty in some centuries, and it happened as ridiculously as possible. But a man who has entered the top ten snipers of the club in its history, can be forgiven for such an oversight, especially with the game that he as a whole (but not in the Lower) shows after the winter. But Spartak has no right to be ahead of Alexander Kerzhakov’s team by three points and two places in the table after the 22nd round! What are the Ivanovs and Meshkovs doing here? What do they have to do with the minus seven goal difference that now appears in the team’s table?

Eternal conversations of different people about the anti-Spartacus conspiracy (it can be called differently, but the essence is the same) right now cause nothing but a smile. Guys, who needs you with your ninth place? To dump you on the tenth? “Spartak” will not take off anyway, it will not rise above the seventh place, the maximum who can overtake – “Akhmat” and “Wings”. And that is far from a fact, because Grozny is ahead of the red and whites by four points, and Samara, who also have one game in reserve – by five.

During the break, the first noticeable departure of the legionnaire in “Spartacus” – the team left Ayrton, who went for a medical examination in “Flamengo”. If it is actually sold for 10 million dollars – in this situation it will be a huge commercial success for Luka Cattani and “Spartak” in general. The Brazilian played from bell to bell, gave the red and whites speed, dynamics, was quite stable, but became a role player, and we can not say that he provided the result. His efficiency in front was clearly insufficient for the lateral, who almost always played according to the scheme with three central defenders, and therefore largely obliged to attack.

In the current Russian championship he has only one goal on the goal plus pass in 21 matches (the first goal in the match with Khimki, won 3: 1), and in 33 meetings of all tournaments, including the Europa League – 1 + 1 . Let’s compare this with 2 + 3 much cheaper Zenit player Danilo Kruhovy, and what a long way to go – with four goals for “Arsenal” Daniil Khlusevich, who moved to Spartak in the winter. I’m not talking about last year’s Douglas Santos, who scored 3 + 11 in the 2020/21 3 + 11 season (the Zenit player has 0 + 1 in this for some reason).

Hlusevich, who can play on both flanks, not Klassen, I think, will be the first option for the now vacant position of left-back in the main lineup. The newcomer showed his potential in the cup match with “Kuban”, let it be the FNL club. However, the option is possible in which Hlusevich will come out on the right, and Moses, who played well in the left half with “Nizhny Novgorod” – there again.

Shamar Nicholson made a pleasant impression on the first matches, but in fact Isidore and Kukhta are more effective in the championship – and the Jamaican hat-trick came in the game with Kuban. It’s time to remind Sobolev, who did not get a real chance from the derby against CSKA. But there is a feeling – hopefully deceptive – that Vanoli has quickly decided on the main and reserve players, and the division is quite rigid. I am upset that Ignatov, who did so well under Rue Vitoria, fell into the second category. But Bakaev shone with Vanoli.

I wonder whose gate they will attack – Khudyakov or Guillermo. The 18-year-old goalkeeper has fully mastered the RPL, began to truly save – and relentlessly give way to returning from injury ex-captain certainly will not. But if Compper and Spartak bet on Khudyakov, he will not have the right to make a mistake.

From the tournament point of view, this game is more interesting for Lokomotiv. If “Spartak” hung in the middle of the table and from it to get up (nine points to the top 5) or fall down (seven points to the joint zone), then “Loko” can still compete for fourth place, which is now Sochi is four points ahead of Compper’s team in the reserve game. However, this place in the current conditions is unlikely to give anything. And to climb to third in the form and quality of the game of the current CSKA and eight points behind him – is unrealistic.

For Spartak, every match now is a team building for the future, and now – preparation for the quarterfinals of the Cup against the same CSKA. It is impossible to think that, having cooled down in the championship, it is possible to take to order and to play smartly in a cup match. But now it has clearly become the main game of spring for the red and whites.

And the derby with “Loko” is just one of the preludes to it.