The failed exchange at Anaheim transformed Eugene’s game beyond recognition.

In the thriller match with “Chicago”, the Russian forward “Golden Knights” Evgeny Dadonov threw the decisive puck in overtime. This is the fourth productive match in a row – so confident he has not played this season.

Did the failed exchange at Anaheim really cheer up Dadonov?

Who does Dadonov play for?

The deadline for the NHL transfer season was incredibly nervous for our striker. In the last hours allowed for transitions, Vegas announced the exchange of Dadonov for Anaheim. The Ducks greeted the new player on their Twitter page, and the Knights said goodbye. But after a few hours there were problems with the transfer.

It turned out that “Anaheim” was among the 10 teams, the transition to which Dadonov under the contract vetoed. His side had to file this list with the NHL this summer. But at the time of the deal, Vegas was unaware that it even existed. The case went to the league for consideration, and the hockey players’ union joined in the investigation. According to some insiders, Dadonov’s side was to blame for the problems – allegedly, the hockey player did not provide his list on time. According to others, the letter was lost during its transition from Ottawa to Vegas in the summer.

Some time later, the NHL announced a decision: the transfer is canceled because it violates the hockey player’s contract with the club. This automatically confirmed that Dadonov or his agent was not to blame for the mistake.

However, for two days Dadonov was unaware – where will he continue his career? Not the best atmosphere to focus on hockey. However, it was in the midst of the investigation that he managed to release his most productive series of the season. And it came in handy for Vegas like never before.

The Knights are now closer than ever to passing the playoffs for the first time in their five-year history. They are fourth in their division and eighth in the conference, but rivals are in dangerous proximity and in a much better position. For example, Dallas is just one point behind Vegas, but has four games left, and Edmonton is one point ahead, but has played two games less.

Such close rivalry does not in fact leave Vegas the right to make mistakes in the remaining 14 games. Even more annoying began Saturday’s match with “Chicago”, which has actually actually said goodbye to the fight for the Stanley Cup: by the second break, the “Knights” lost 0: 3. The injury of main goalkeeper Robin Lehner is to blame for everything, which is why Logan Thompson, who played only his 11th meeting in the NHL, played at the goal.

It was possible to remember how much Vegas was at stake at the beginning of the third period: the first successful attack was dispersed by Dadonov, who brought the puck to another half of the field and provided it with Chandler Stevenson. He did not miss. Then the Knights spent two more striking minutes, leveling the score. But Chicago took the lead again in the middle of the period, albeit briefly: Alex Pietrangelo regained his balance in less than a minute. 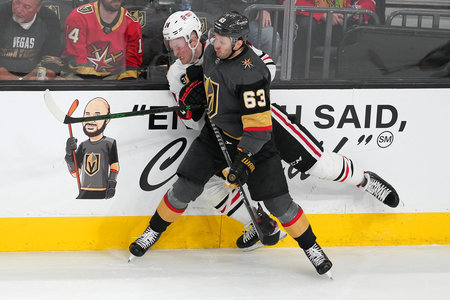 The rivals went to the break with a score of 4: 4, and decided the outcome of the meeting two minutes after the start of overtime. Dadonov did it: he received a pass from the right, advanced to the middle of the field and drove the puck into the net with a powerful hand throw.

Answered on the ice

The Russian was recognized as the first star of the meeting, and the winning goal was his fifth in the last four meetings. In total, he scored 8 points (5 + 3) during this period. In March, Dadonov scored the most goals in Vegas – 7 goals, although he played two games less than his teammates. Surprisingly, after the final “return” to the camp of the “knights” Dadonov did not disappear, but on the contrary, was inspired as never before and scored 5 points in two games.

Perhaps the unexpected exchange made him look at his game from the other side. Or, conversely, just infuriated. After all, the original reason for the deal was the desire of “Vegas” to clear the space under the salary ceiling to return from the list of injured forward Mark Stone and defender Alec Martinez. 5 million Dadonov would solve this problem. But the deal did not happen, but the Russian literally shone on the ice, as did not dream of Stone. His game and character were also noted by head coach Peter Debour.

“Strength of character is measured by how you react to failures,” he said. – I think the way Dadonov reacted to his exchange on the ice speaks volumes about him.

However, the Russian himself is already tired of discussing this topic. He suggested forgetting the transfer scandal and focusing on the fight for the playoffs, in which Dadonov is beginning to play a key role.