The 30-40% reduction in the cost of bitcoin and Ethereum in just one week has wreaked havoc on the video card market as a whole. Miners began to sell their graphics accelerators at lower prices, as the profitability of mining decreased significantly. This, in turn, has created problems for video card makers that have accumulated stockpiles of the GeForce RTX 30 Series and Radeon RX 6000 and are now struggling to sell them.

The current situation has expanded the range of the most affordable offers for ordinary gamers. Something similar has already been observed in 2018, when millions of used GeForce GTX 10 series accelerators and Radeon RX 400 series accelerators hit the market. At the moment, it is difficult to say how the video card market will feel in the long run, but it is already clear that many miners have decided not to wait for the cryptocurrency rebound. Many of them, who bought video cards at significantly inflated prices, understand that the profitability of mining, as well as the ability to return the investment decreases with each passing hour. The only sure option for them is to try to quickly get rid of video cards on the secondary market.

Tom’s Hardware portal has analyzed the video card market in the United States and notes that many models of accelerators can now be purchased cheaper than their recommended prices. Some models, most notably NVIDIA cards, are still resisting market pressures, but further reductions in prices for new graphics cards will now also be influenced by the market for used accelerators.

In general, over the past two weeks, new video cards have fallen in price by only 2% on average. However, it should be borne in mind that some Radeon RX 6000 accelerators at that time were already offered at recommended prices and even cheaper. Their price may fall even more only if AMD officially announces a price cut.

The market for used accelerators already offers cards much cheaper than the recommended price tag. Over the past two weeks, graphics cards have fallen in price by 10%, for example, on the eBay platform. The eBay Buy it Now column has been added to the accelerator pricing table below. It shows the lowest price of a video card on eBay, which can be redeemed immediately without an auction. And here the prices are on average even lower than in other columns. The Retail and AVG eBay columns show retail and eBay prices on June 1 and 15, respectively. 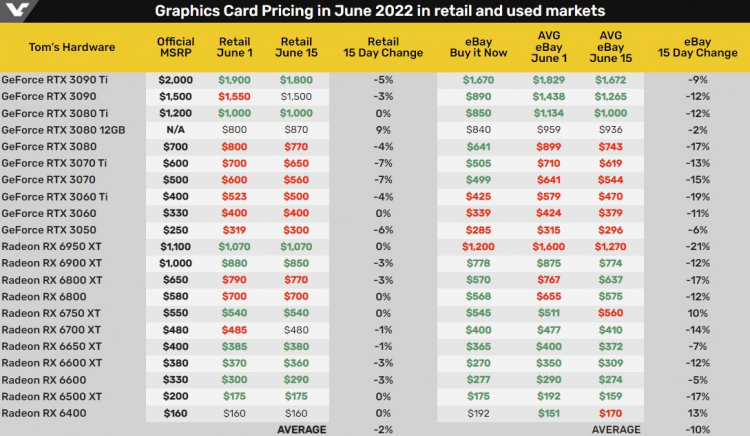 Prices for GeForce and Radeon graphics cards at retail (Retail) and on eBay. Image source: VideoCardz according to Tom’s Hardware