Despite important differences in the entourage, a noticeable difference in pace, presentation and features of the visual perspective, Weird West is largely felt as the ideological successor to Dishonored. The story here also sends to a harsh and gloomy land, where human ruthlessness and unscrupulousness are neighbors with mystical and mysterious motives of the unknown, and spicy nuances of the world are combined with simple and understandable human matter. And the direct influence of the player on the environment here is also significant: our every action and any choice (for example – money or friendship) will inevitably affect the image of the Strange West. And it is from these little things that our personal solution to the great story will come together.

Once a bounty hunter, a pigman and a werewolf enter the saloon. And the bartender told them: “Get out, we don’t serve them.” The lycanthrope and the pig looked at each other: “I wonder why he doesn’t like bounty hunters so much?”

Weird West is probably one of the most atmospheric game incarnations of the mythologized Wild West. The atmosphere is extremely subtle, and the feeling of constant and invisible danger does not leave for a moment. Still: the old woman with the scythe is waiting for the traveler at literally every step – whether he will walk through the drying desert, or walk through a remote town, or try to get through the disgusting swamps or be near an abandoned sinister mine. And the contingent in this region is terrible: mad from the moon lycanthropes, bloodthirsty pigs, sectarians with very specific goals and no less unique methods, and just cruel scoundrels of all stripes. But for us personally, these dangers are perhaps the most pressing problem, because our destiny is intertwined with more global events.

Somewhere in an unknown place is a mysterious room with portraits, where adherents of the bizarre cult are conducting a strange experiment on us. The passenger (the so-called protagonist) is alternately moved into the bodies of five different personalities to see how he will behave in critical situations where life and death are separated by the moment of pressing the trigger. And the “vessels” for the experience we chose the appropriate.

How do you like, for example, the pig man Clears Kui’g with amnesia, who seeks to destroy an ancient tree at the request of the tree itself? The eerie chain of events will reveal the reason for how and why the protagonist got a snout, and where his memories went. And in the finale of the arch, the hero even flashes a small chance of redemption. Which he may not have deserved, it all depends on us. 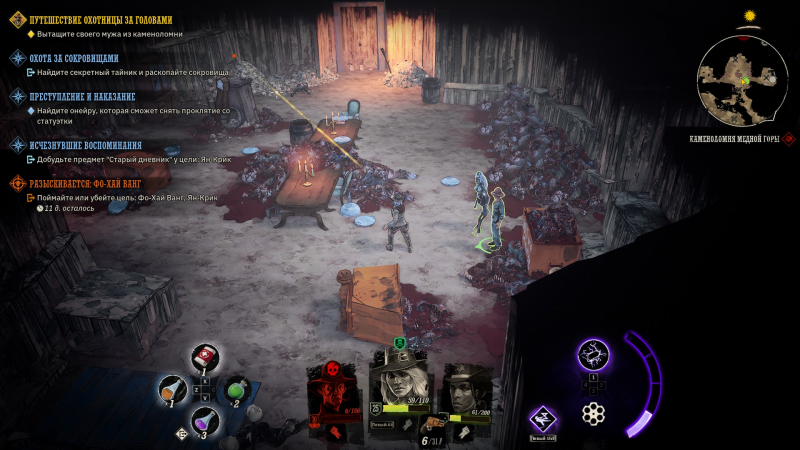 No less interesting is the story of Jane Bell, a retired bounty hunter who has to take up arms again. And all for the sake of revenge for the murdered son and to rescue the man from the captivity of horrible mermaids, who prefer the human body to all dishes. Werewolves also appreciate such delicacies, one of which is given to us under our care. Only the player decides whether to follow the path of wolf instincts or try to change the order of things and restore the human face.

Our decisions play a role in the history of the indigenous people of these lands named Crossing the River, who seeks to overcome Wendigo, and at the same time resist the disease of intoxicating greed. But the final story of Oneira (Witch Worship) Constance Driftwood is less dramatic, but this is where you have to gather the heroes of previous adventures … alive or dead!

All stories are closely intertwined: secondary characters, changing locations and events united by a thread of narrative. Sometimes even inaction and skipping a side task affect the further development of the action. So one hero has to deal with the chaos left by another, and the other protagonist on the contrary – to destroy what his predecessor built. Yes, there – you can just come to the house of the previous character under our control and release the whole drum of the revolver. Just because it’s allowed. But it is worth remembering that the game is sure to remember, and maybe remember!

The basic basis of the gameplay for all is the same – it’s dynamic real-time shooting with isometric appearance, slowing down time, ample opportunities to use the environment against enemies (and sometimes yourself and allies) and, if desired, elements of covert passage. But each hero has his own specific set of special abilities.

Pig people, for example, may become invulnerable to injury for a while; the Native American is able to summon the spirit of a bear; the cultist is able to teleport short distances; to enchant and seduce for a short time the hunter keeps behind his head; and the missing lycanthrope Dizederio Rios in a critical situation turns to a fiery aura. However, the general active skills that strengthen firearms and bows seemed to me much more reliable.

The arsenal here is divided according to the classical principle of color, where white – barrels firing on the word of honor, and orange – a weapon of absolute and exceptional power. Another interesting item of equipment – talismans that have unusual properties: accelerated movement in the wind, instant reloading of the barrel in the event of a deadly hit on the enemy or, say, increased damage to a good / terrible reputation. However, to find decent samples of equipment, you have to frantically turn everything upside down, hoping for a decent prey or at least a couple of rounds, the lack of which is felt regularly. 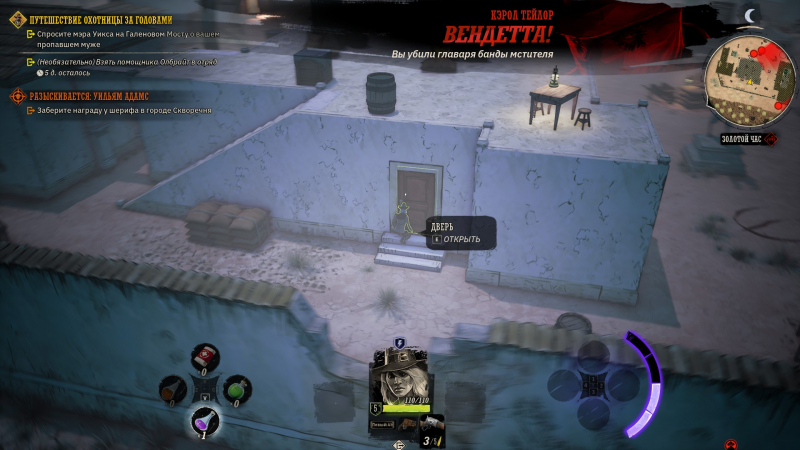 If you lead someone’s boss, relative or friend to lead, you may be declared a vendetta. However, the bloody retribution can be stopped by treating the slaughter “delicacies” and the avenger

On the one hand, Weird West generously encourages the player for perseverance, on the other – this is related to its main problem: an inconvenient prospect. Small objects in locations are combined with an isometric camera not in the best way, and the search for another quest item* sometimes turns into subtle torture. For some reason, the developers did not foresee such a simple thing as highlighting objects for interaction.

However, the camera annoys even during fierce shootings. Because of her “whims”, the protagonists regularly catch bullets or get stabbed in the neck with a sharpened butcher knife, fail stealth operations and find themselves in other bindings. Of course, you can get used to the camera, but even after twenty hours to call it a convenient language will not return. By the way, speaking about the peculiarities of the “quiet” passage: opponents sometimes do not hear the fierce fire literally around the corner. 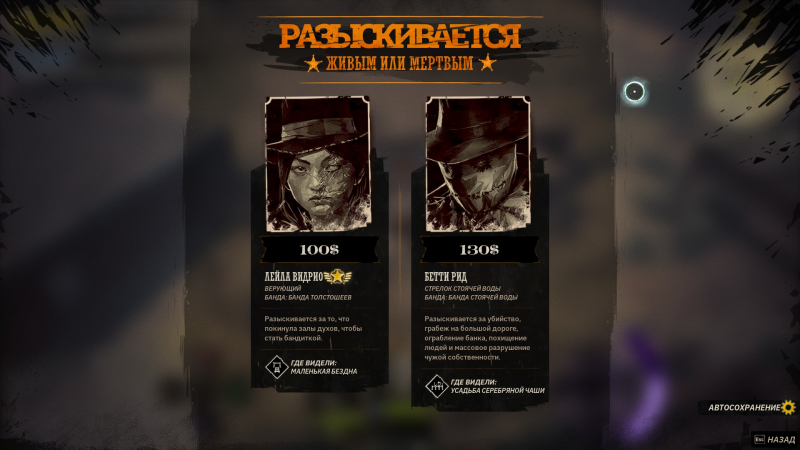 A good way to make quick money is to take an order to kill or apprehend a particularly dangerous criminal. The main thing is not to spend more on ammunition and equipment than you will pay for the work

Another unfortunate element is the random events that happen to us while traveling the world. Encounters with bandits, packs of wolves or mad bears, or, say, meetings with a mysterious savage who clearly understands the essence of things that are happening – all this is entertaining at first. But before the second chapter of our adventures in the Spicy West, road meetings come to the second (and then to the third and fourth) circles and begin to get seriously tired, knocking the main narrative out of the canvas. It is especially annoying closer to the finale, when we decide the fate of the world, and here on the main road a couple of armed income somehow decides that trying to rob us is a good idea. Few works benefit from such stretching of timing.

And yet the described roughness is not able to affect the undoubted strengths of Weird West. To a world rich in subtle nuances and relationships, to the wonderful atmosphere of a mystical western, to the powerful stories of the characters, imbued with motives of redemption, search and rethinking in life and the eternal idea that charity can be stronger than a bullet. But sometimes you can’t do without bullets.

Learn more about the grading system

* Included in the list of public associations and religious organizations in respect of which the court decided to eliminate or prohibit activities on the grounds provided by the Federal Law of 25.07.2002 № 114-FZ “On combating extremist activities.”