From the first seconds of the broadcast we see the release of Imperium. The guys are standing on the ramp, but they are being attacked from behind by MSK and La Knight. A fight begins, which gradually takes effect in the ring, followed by a blow to the gong and we begin the first fight.

LA Knight attacks Fabian Aikner and kills him with powerful blows in the corner of the ring, but Aikner takes control and strikes a couple of hard blows in return. Marcel Barthel takes the tag and continues to beat Knight. He focuses his blows on the opponent’s hands, but Barthel makes a mistake and allows Knight to pass the tag. Nash Carter entered the ring for a moment, after which Knight ran out again and started a fight with Barthel. In the middle of the match, Gunther began to join the fight and threw powerful chops at Knight, while Barrett and Aikner tried to exhaust him in chinlocks. After the commercial break, the speed of the match increased significantly. Imperium managed to beat Nash Carter and keep him after a powerful lockline. It is worth noting that Günther had previously managed to destroy Knight and Wes Lee in the ring side, thus leaving Carter to eat his comrades.

In the behind-the-scenes video, Io Shirai and Kay Lee Ray recall that they won the Dusty Rhodes tournament and are actively promoting their four-way match for the NXT title at Stand & Deliver.

After the advertisement, Dakota Kai walks the corridors in search of Wendy Chu. Kai finds her pajamas and slippers, and a torn pillow.

Ivy is inferior in size to Tiffany, but her onslaught shows that physically she is not inferior in anything. For the first few minutes, Ivy literally knocks all the shit out of Stratton, making her run screaming in horror. Suddenly, Surrey appears in the ring. She distracts Stratton, and Niall closes her in suffocatingly and forces her to give up.

Tommaso Chiampa is sitting behind the scenes. He talks about how fans have been constant throughout his NXT journey, the ups and downs, everything in between, from high-profile events such as title victories to personal issues such as his wife, who has there were five miscarriages before giving birth to the miracle that is their daughter. He goes on to say that fans have always been close to him, and together they have created “black and gold magic”. Chiampa says he hears whispers that Stand & Deliver may be the end of an era, and if so, we will create this magic for the last time. Chiampa goes to drop his chair as usual, but instead he leans it against the wall, showing how he painted on it “September 9, 2015 – April 2, 2022.”

Persia Pirotta and Indy Hartwell are arguing behind the scenes about who is the best couple – Indy and Dexter Lumis or Persia and Duke Hudson. Tensions are rising, but they agree to put on their best outfits and bring their men to Texas for a weekend of Stand & Deliver, and let the fans decide which pair is hot. They shake hands and leave. It seems that this may be a kind of segment in Stand & Deliver, where they will vote for the most beautiful couple.

Mackenzie Mitchell is interviewing Cameron Grimes behind the scenes. She asks how he feels as he prepares for today’s stand-up qualifier at Stand & Deliver. Grimes says he’s usually confident, maybe even too confident, but he can honestly say he’s nervous because it’s the most important match of his career. Grimes says Roderick Strong and A-Kidd don’t need this victory as much as he does. Grimes says he wants to win the title because he promised his late father that he would.

We return to the ring and see Toxic Attraction. Mandy Rose talks about how she was forced to defend at Stand & Deliver in a four-way match. She says she is not afraid of anyone and is ready to defeat all the contenders for her title. Rose says everyone should remember who she is – she’s the coolest bitch in the game, and she has the best support they’ve ever seen. She brags about Toxic Attraction’s dominance on the brand and says she will humiliate Cora Jade on Saturday, rid NXT of Shirai once and for all, and send Kay Lee Ray home. Rose says that after she defeats these three women, she will consolidate her legacy and become the greatest NXT champion among women of all time.

Rose says that before we witness the greatness on Saturday, we need to get down to business tonight – Wendy Chu and Dakota Kai. Rose says they did them a favor by removing Raquel Gonzalez and Cora Jade, and virtually handed them the victory in the Dusty Rhodes tournament, but they still failed. Rose laughs and says that Chu apologized today for not doing her job. Dolin and Jane retrieve Chu’s belongings, which they took away earlier today. They all laugh and the fans whistle at them. Dolin and Jane continue to say that they rule the NXT command division. They pose in the center of the ring with their titles, but suddenly Dakota Kai appears nearby. She rushes into the ring and starts a fight, but the Toxic Attraction threesome score her without a single chance of success.

The musical theme is Raquel Gonzalez. Former NXT champion rushes to the ring. She cuts down Jane, then destroys Rose and takes Dollin. Toxic Attraction runs away in horror, and Raquel and Dakota Kai clean up the ring. Dakota throws herself into Raquel Gonzalez’s arms. They raise NXT team titles and pose in the center of the ring. Mackenzie is behind the scenes with Trick Williams and NXT North American champion Carmelo Hayes. Carmelo says people should respect him, but Grayson Waller and Sanga interrupt his interview. Waller says he may join Hayes at a commentary panel tonight. 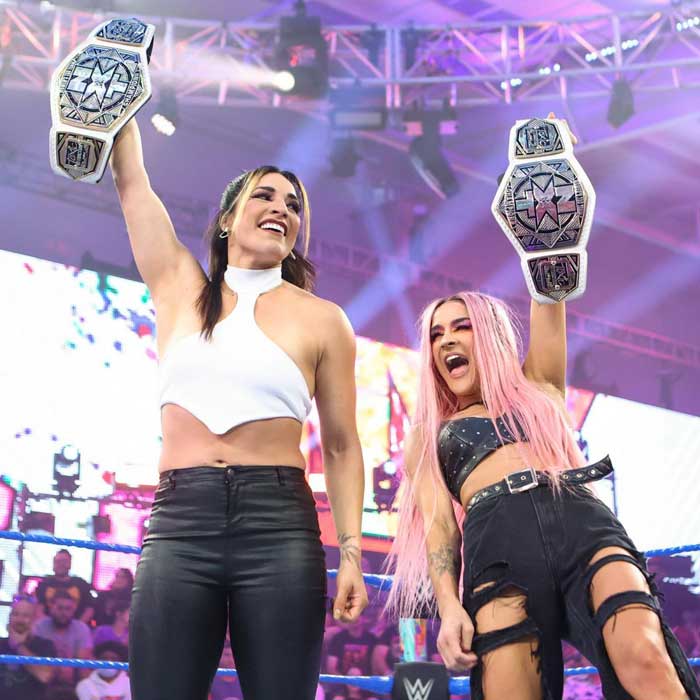 Bodie confidently starts the match and throws Wagner out of the ring, but it only made him more angry. Von Wagner begins to score Hayward in the center of the ring, holding him close to the ropes. Powerful suplexes and a series of blows eventually lead to Wagner celebrating another victory. After the match, Wagner attacked the Jacket Time, who commented on the match behind the commentary panel.

We are shown a pre-recorded video by Tony D’Angelo. He says Tommaso Champa made a big mistake by attacking him. Tony Dee thinks he should remove Champa from the NXT, and he tells Champa that Stand & Deliver will be his last match.

Joe Gacy flies into the attack, but Draco easily reverses all the blows and sends in the ropes. In a rage, Gacy returns to Anthony and starts holding him in the headlock. Draco beats his knees, but gets caught up again. At the end of the match, Gacy manages to hold his final lariat and celebrate a confident victory.

Another easy win for Lyons. She beat the world-famous Jobbersha and celebrated the victory after her brilliant finisher.

Nikita celebrates her victory in the center of the ring, and Lash Legend appears on the titanthron. She scoffs at Nikita and says they have unfinished business that needs to be taken care of after Stand & Delivery. Lash says Lyons is fine, but she’s not as good as Lash, and after Stand & Deliver Lash will show how sportier she is, more talented and, more importantly, a bigger superstar.

Malcolm Beavers advertises his group behind the scenes and says Roderick Strong will qualify for Stand & Deliver tonight and then become a two-time NXT North American champion, after which the Creed Brothers will win NXT team titles that evening. Bevans says they’re taking all the gold, and he’ll have more gold than Mr. Tee. Beavens and his team go to the ring, and the Creed Brothers stay behind the scenes. Brutus receives a message with a city code of 718 (New York) or 781 (Boston). The man wishes the Creed brothers good luck at Stand & Deliver and says they will watch. Brutus thinks these are the same dudes who attacked them. Julius reassures him and says that everything is fine, first they will deal with the title match, and then they will remove these guys when they appear.

All three participants of the match show interesting interaction in the ring. No one decided to join the team and everyone works on their own. A-Kid makes a series of strong drops, but Strong joins the fight and scores it in the corner of the ring. Roderick throws Grimes into a corner to A-Kid, but he manages to reverse and send a counterattack on Strong. The fight smoothly goes beyond the ring. Grimes stops Kid’s running on the head with his foot, and Strong takes him off the ring and we pause for a commercial break.

Solo Sikoa appears near the ring, who is watching this match with special interest. The guys return to the ring, where Kidd tries to close Strong in pain, but Roderick reverses and responds with a counter-attack on the pain. Cameron Grice joins the match, but quickly flies back into the ring. We are shown Santos Escobar, who is watching the match from the fan sector, and Grayson Waller appears in another corner of the arena. More and more people are gathering around the match, and Grimes is trying to turn Kid around, but Strong prevents him from doing so. The speed of the match is just insane. All three fly to attack and show excellent chemistry. Grimes crosses and then attacks Kidd, but Strong breaks the retention again at the last minute.

Fans are chanting “this is awesome”, and Kidd cuts down Grimes after a powerful neckbreaker. Guys start exchanging chops literally with all their might. Strong leads a backbreaker on Kid, and then launches it to Grimes. At the end of the mast, Strong manages to ruin Kid, but suddenly Grimes speeds on him and celebrates the victory! Cameron Grimes is the last to pick up a ticket to the stairwell! 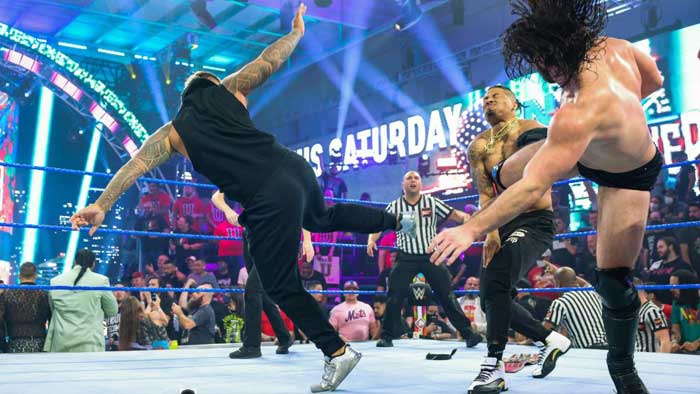 After the match, Carmello Hayes congratulated Grimes on the victory, but added that he still has no chance of winning. Escobar, Waller and Sicoa joined the conversation. Each of them believes that he deserves to win this match. As a result, it all ended in a big fight. At that moment, the show went on the air.

The last broadcast before NXT Stand & Deliver turned out to be absolutely passable. The only bright spot on this show can be considered only the final tripartite match, which turned out to be really interesting. I recommend watching this match, but there was no more interesting wrestling on the show. The situation in the women’s team roster and near the North American championship seems the most prestigious on this brand, as the other championships in this episode were almost unnoticed. There were a lot of passing matches on the show, which just wasted time on the air, although this time could be allocated to the plot for the main title, to somehow warm up the atmosphere before the match for the NXT women’s title and other moments that were missing today.

Evaluation of the show from readers:
(rate your show on a ten-point scale):